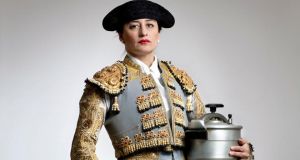 The male-dominated domain of bullfighting has frequently faced charges of sexism, but as the northern Spanish city of Santander celebrates its annual fiesta, an unexpected gender-based controversy has erupted.

On the front cover of the Toros magazine (inset), which is dedicated to the bullfighting festival taking place this week, there is a photograph of a woman dressed as a bullfighter. She is wearing a traditional suit of lights and holding the torero’s sword in one hand. But in a striking twist, she also has on red high heels and is clasping a pressure cooker in her other hand.

The Mujoca organisation, which represents young women from the northern region of Cantabria, of which Santander is the capital, described the cover as “a clumsy attempt to show a modernised and egalitarian image in the traditionally sexist world of bullfighting”.

The organisation added: “Thanks to the presence of the high heels and the pressure cooker, we believe that this instead perpetuates gender roles.”

criticism from elsewhere. Santander-based TV presenter Edu Pesquera described it as “shameful” on Twitter, while another user on the social network labelled it “insulting”.

Mujoca has also voiced outrage at the support the magazine has received from local authorities.

On its back cover, Santander mayor Íñigo de la Serna, of the conservative Popular Party (PP), pays tribute to the city’s festival and other senior officials attended the publication’s recent presentation event.

The photograph was taken by artist Pilar Albarracín, who also poses as the “bullfighter” in the picture. A controversial photographer, video and installation artist who used to live in Ireland, her work frequently plays with stereotypical cultural references of her native Spain.

“The work of artists is to make the public reflect,” she told one interviewer before the furore blew up. “I’m interested in the comparison between the bullfighting world, the idea of the performance in the ring, of the battle and the body, with the other world, which is that of the woman and her daily battle.”

Albarracín told El País newspaper that after 25 years as an artist she is “used to people misinterpreting [her] work”.

Although women have taken part in bullfights in Spain since the 18th century, it is rare for female matadors to perform in the country’s top bullrings. Many leading male bullfighters have even refused to be on the same bill as women.

Ms Albarracín told The Irish Times that her work had been misinterpreted and she considered herself a feminist. “Women should be able to dress however they wish,” she said.