Heroes like Stéphane Hessel, who believed that poetry has the power to save us, provided the moments of inspiration that shine through France’s gloom 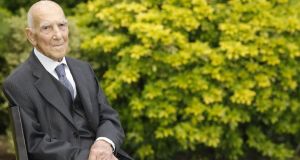 I had intended to write a column on the genius of France and the joys of being an American in Paris. Then my lifelong Francophilia was dented when it crashed into the formidable wall of French bureaucracy.

On my return from Washington the moving company and estate agents required stacks of papers to extricate my belongings from French customs and secure a rental apartment.

But first prize must go to the Préfecture de Police, which demanded no fewer than 26 documents and a total of seven appointments at the foreign ministry, police headquarters and the office of immigration before I may, possibly, regain my status as a legal resident.

The frantic quest to satisfy the bureaucrats sent me to my bank, two insurance companies, the electricity company, a notary and a sworn court translator, since all documents must be officially translated. The biggest challenge is to prove that one lives at the same time abroad and in Paris.

A sign posted in the Europe, Near-East and Americas room at the préfecture reminds immigrants of “the necessary respect of rules of courtesy” and warns that “in the event of insults, threats or acts of violence against agents working here, the author of the infraction may be prosecuted and sentenced to prison”.

On my first visit, the apparent head of the service, a skinny blond man with a flutey voice, upbraided me because, he said, the French consulate in Washington had given me the wrong type of visa.

On my second visit the woman ahead of me said she had returned with a document requested the previous day, after a four-hour wait. “Don’t tell me you waited four hours!” the receptionist snapped back.

Lesson learned. Don’t complain. Don’t mention that you’ve been ill for 10 days after queueing in the snow outside. From the frequent coughing in the waiting room I surmised that other applicants had caught cold the same way.

In 1893, Georges Courteline immortalised France’s petty bureaucrats in a satirical novel called Messieurs les R onds- de-Cuir , after the leather cushions that civil servants sat on. The “ronds-de-cuir” are still ridiculed and detested. Like Courteline’s bureaucrats, the tormentors of the préfecture derive sadistic pleasure from sending people away for ever more documents.

We, the supplicants, wait hour after hour in the great social leveller of the préfecture. Most look like taxi drivers or cleaning ladies. Most stare into the middle distance, sullen, cowed, verging on despair.

My third appointment lasts eight hours. While I wait, I read the appropriately titled Time for Outrage ( Indignez-Vous! ) by Stéphane Hessel, a hero of the Resistance, survivor of Buchenwald and co-author of the Universal Declaration of Human Rights . Hessel died on February 27th, at the age of 95.

The French, Hessel wrote, must ensure “that our society remains a society of which we can be proud: not this society of . . . suspicion towards immigrants”.

I strike up a conversation with Mark and John, a retired American couple. We wonder what the French fear from us. The mood in France is so dismal, the economy so stalled, we conclude, that they want us to give up and go home.


‘A great Frenchman’
President François Hollande eulogised Hessel as “a great Frenchman, a just and free man”. In his last interview, with the Nouvel Observateur , Hessel was less praising of Hollande. “He’s cautious! Too cautious,” Hessel said, exhorting Hollande to grow bolder.

Hollande yesterday started a new strategy of reaching out to the provinces. He slept last night in Dijon’s town hall, in a bed 2.5m long made for Gen Charles de Gaulle. The radio report seemed to ask where all the great men had gone.

Fortunately, moments of inspiration shine through France’s gloom and self-doubt. Hessel, like President Michael D Higgins, believed poetry has the power to save us.

The other day I walked cheerfully across the Left Bank, having resolved my housing problem. In the cobblestoned rue Férou I found Arthur Rimbaud ’s epic, lyrical Le Bâteau Ivre stencilled on the walls. The columns of verse were painted right to left, as if in an eastern language.

At the end of the poem I found an explanation: Rimbaud recited the poem for the first time at the age of 17 on the first floor of a café on the adjacent Place Saint-Sulpice.

“In our imagination, the wind was blowing from Place Saint-Sulpice towards the right, into the rue Férou,” the note concluded.

Suddenly the travails of the préfecture seemed inconsequential. The magic of Paris was restored for me and I felt fortunate to be here.

Luke ‘Ming’ Flanagan bares his bottom half to European Parliament