Macron under pressure as Élysée blamed for ‘Benalla affair’ 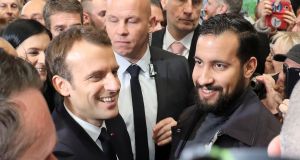 French president Emmanuel Macron sank deeper into the quagmire of the “Benalla affair” on Monday, when his interior minister and the head of the Paris police blamed the Élysée for its inept handling of the scandal, in testimony before a parliamentary commission of inquiry.

The crisis occurred because the unofficial chief of Mr Macron’s security at the Élysée, Alexandre Benalla (26), spent his day off on May 1st masquerading as a policeman, with the collusion of friends in the Paris police force, and beat up two unarmed protesters at a street demonstration.

Opposition deputies on Monday demanded that Mr Macron testify before the commission of inquiry. They want to know why Mr Benalla was not fired immediately when the Élysée learned of his actions, and why the Élysee did not report the assault to the prosecutor’s office, as required by law.

Mr Benalla enjoyed authority and privilege disproportionate to his age and experience. He had an office at the Élysée, an official car with flashing police lights, and lived rent-free in the building on the Quai Branly, where the late president François Mitterrand once kept his mistress and secret daughter.

David Le Bars, head of the senior police officers’ union, the SCPN, said Mr Benalla had for months been giving advice to police stations and attending big events, his police radio in hand.

Mr Macron cancelled plans to make an appearance at the Tour de France on Wednesday. His four closest associates, including the prime minister and interior minister, met with the president at the Élysée on Sunday night.

One of them leaked quotes from Mr Macron to French media, saying the president condemned the “shocking, unacceptable behaviour” of his former Monsieur Sécurité, that there would be “no impunity” and that he would address the scandal publicly “when the time is right”.

Interior minister Gérard Collomb, who is responsible for the police, washed his hands of the affair, telling parliamentary deputies that “the president’s cabinet and the police prefecture had all the necessary information to act. I considered that the events in question were being dealt with at the appropriate level, so I did not pursue it.”

Paris police prefect Michel Delpuech said Mr Benalla had been invited to the demonstration as an observer. “He wasn’t supposed to take initiatives. Mr Benalla wasn’t under my authority.”

Mr Macron fired Mr Benalla on July 20th. On July 22nd Mr Benalla, a bodyguard for Mr Macron’s political party and three policemen were mis en examen, which is tantamount to being charged, in connection with the May 1st incident.

Mr Benalla’s lawyers said in a statement that their client was “stunned by the political and media exploitation of his action on May 1st”. Mr Benalla, they said, “took the initiative to give [police] a hand in apprehending … two particularly virulent individuals” because  “the operational capacity of the policemen” was “overwhelmed”.

Mr Delpuech, the police prefect, said the two young people whom Mr Benalla is accused of assaulting had been released without charge and that police “had nothing on them”.