Macron stands at gates of the Élysée in a fractured France

Polls strongly back En Marche! founder for second round but he cannot get complacent 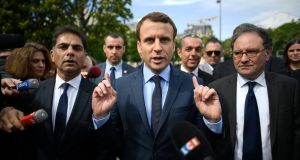 French presidential election candidate for the En Marche! movement Emmanuel Macron at a ceremony at a monument in memory of mass killings of Armenians by Ottoman forces in 1915, in Paris on Monday. Photograph: Lionel Bonaventure/EPA 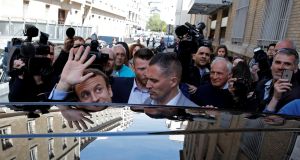 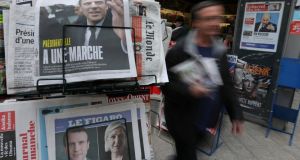 A divided country: the second round of the presidential election will take place on May 7th. Photograph: Eric Gaillard/Reuters

When Emmanuel Macron and his wife Brigitte appeared on stage on Sunday night, jubilant and containing their emotion with difficulty, it was as if they knew that Macron had already been elected president of France.

The followers of En Marche!, the political movement Macron founded just a year ago, wept with joy, cheered and danced following his first-place finish with 24 per cent support in a first-round vote .

An Ifop poll conducted on Sunday night showed that 62 per cent of votes are likely to go to Macron in the second round of the presidential election on May 7th, compared to 38 per cent for the extreme right-wing Front National (FN) leader Marine Le Pen.

There was joy, too, in Brussels, where European Commission president Jean-Claude Juncker tweeted his congratulations to Macron. As reported by the French daily Le Monde, European civil servants gathered in Irish pubs around the commission to celebrate. “We’ve found our Kennedy! The new frontier for France and Europe can begin!” one declared.

The Paris bourse rose 4.1 per cent on opening on Monday morning, and stock markets made gains in Madrid, Milan, Frankfurt and London. Interest on French bonds fell to the lowest rate since mid-January. The spread with German bonds narrowed. The euro rose 2 per cent compared to last Friday, to its highest rate since November 2016.

But the last two weeks of the campaign, and the legislative elections in June, remain fraught with danger for Macron. He and Le Pen, who finished second in the opening round vote, will take part in a live television debate on Wednesday, May 3rd. Le Pen is aggressive when challenged. Macron tries to soften the edges.

The election is partly about the rejection of “the system” that has ruled France since 1958, particularly the last two presidential terms, the first conservative, the second socialist. Ironically, a population that is disillusioned with “Hollandisme” is about to elect the candidate who most resembles President Francois Hollande.

Le Pen called Macron the “heir” of Hollande on Sunday night. Hollande telephoned Macron to congratulate him, and endorsed him in an address from the Élysée Palace on Monday. Le Pen will exploit their connection to the fullest.

Le Pen’s erstwhile slogan of La France apaisée (France becalmed) is all but forgotten. In the last stages of the campaign before the first round, she reverted to her old, virulently anti-immigrant, anti-Islam and anti-Europe persona.

Le Pen makes a convincing, if flawed, case against the EU, the euro and globalisation. Macron repeats the old arguments that the EU has brought peace to the continent and that France alone does not constitute the “critical mass” needed to confront international problems. It will take more to convince millions of French people who perceive themselves as victims of Europe and globalisation.

Macron says he relies on the intelligence of the French to give him a parliamentary majority in the legislative elections of June 11th and 18th. He has vowed to present candidates in all 577 constituencies, half of them non-politicians from civil society, and half of them women. An online appeal for candidacies yielded 14,000 applications, which are being parsed by a committee.

On Sunday night, the majority of politicians from the ruling socialists and the conservative Les Républicains urged the French to shift their votes to Macron in the second round. On Monday, the Socialist Party – which has threatened to “excommunicate” socialists who stand on the En Marche! ticket – called on socialists to vote for Macron.

The failed conservative candidate Francois Fillon said he endorsed Macron “with a heavy heart”. Fillon won 20 per cent of the first-round vote, and polls show that half of his voters will cast ballots for Macron in the runoff. One third will vote for Le Pen, and the rest will abstain.

The far left candidate Jean-Luc Mélenchon also won nearly 20 per cent of the vote. He made an embittered, accusatory speech against “mediacrats and oligarchs” on Sunday night, in which he refused to give instructions for the second round. Though Mélenchon and Le Pen differ on immigration, they are both anti-EU and pro-social spending. A percentage of Mélenchon’s voters will rally to Le Pen. It would be irresponsible, even dangerous, for Macron to assume that his victory is certain.

Le Pen’s percentage of the vote has fallen from close to 30 per cent in polls last winter to an official score of 21.43 per cent in Sunday’s election. She nonetheless gained the FN’s highest national score ever, 7.6 million votes, 2.8 million more than her father in 2002.

The fact that a nationalist, xenophobic party “manipulated by a cynical, unscrupulous family clan” has for the second time qualified for the presidential runoff is “a serious wound” to the French nation, Le Monde warned in its editorial, noting that for the first time, the FN has surpassed 20 per cent in a presidential election.

Le Pen says France is divided between “Europists and patriots”. For Macron, the dividing line is between “progressives and conservatives”. The contest pits the “open France” of Macron against the “closed France” of Le Pen, happy France against unhappy France.

The division is geographic, between cities and the countryside, and between the northeast and south, which voted for Le Pen, and the west, which voted for Macron. The break is most obvious in Paris, where Macron won his highest score of 34.83 per cent, compared to only 4.99 per cent for Le Pen. L’Aisne, the poorest department in mainland France, gave Le Pen 35.57 per cent of its vote.

The most magical words in Macron’s vocabulary are “renewal” and “rassembler”, the verb meaning “unite,” or “bring together”. Winning the first round of the election was the crucial first step. The odds strongly favour Macron defeating Le Pen on May 7th. The hard part will come after.