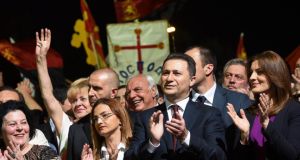 Macedonia’s prime minister Nikola Gruevski (centre) attend a rally in support the government in Skopje in May. Macedonia is to have early parliamentary elections next year. Photograph: Georgi Licovski/EPA

As Macedonian police launched raids this week against what it said were suspected Islamist radicals, many in the crisis-ridden Balkan state thought back to a recent, bloody gun battle that is still shrouded in mystery.

The northern town of Kumanovo, 13km from the Serbian border, was one of several targets for police units on Thursday, but the special operation was low-key in comparison to a deadly onslaught that reduced much of one district to rubble in May.

“There was no warning. We woke up to gunfire at 5am,” said Kumanovo resident Fazli Shabi Asani. “Our house was destroyed, as were 16 in this neighbourhood,” he said, looking around at streets of tightly packed buildings from one of several dusty spaces that mark where houses were demolished.

Asani (61) and a few neighbours are rebuilding their homes, even as other nearby houses still stand abandoned, their windows shattered, roofs gaping and walls gouged by machine-gun rounds and grenades.

In the early hours of May 9th, Macedonian special police sealed off this Kumanovo area called Divo Naselje – which translates as “Wild District” – with armoured personnel carriers as a helicopter swooped overhead.

For the next day-and-a-half, they fired machine guns and rocket-propelled grenades at houses that they said were occupied by a heavily armed gang of fighters led by battle-hardened former rebels from neighbouring Kosovo.

When the dust settled and police withdrew, eight of their officers had been killed, along with 10 gunmen from what the government called “one of the most dangerous terrorist groups in the Balkans”.

The EU and US called for calm, while Kosovo and Albania urged Macedonia to respect the deal that ended a brief 2001 insurgency by ethnic-Albanian rebels in the country, and which promised more rights and powers for a minority that comprises almost one-third of Macedonia’s population of two million. Ethnic Albanians live in Kumanovo’s “Wild District”, whose name comes from its haphazard development but also carries a suggestion of murky dealings and criminality.

Many Macedonians feel the Kumanovo clash was the bloodiest in a series of episodes that show that the country is run by a corrupt elite that will stop at nothing to retain power.

The gun battle took place at a time of growing street protests to demand the government’s resignation, over wiretapped phone conversations that reveal the extent of state eavesdropping, covert control over the judiciary and media, and top officials’ alleged role in corrupt, criminal and anti-democratic schemes.

With public trust in officials at rock bottom, many Macedonians suspect the Kumanovo clash was a government ploy to distract attention from the scandal, by stoking security fears and ethnic tension between Albanians and Macedonians.

“Almost everyone thinks it was a set-up,” said Zem (22), a Kumanovo resident who declined to give his surname. “What happened here was a big show, to take away attention from Gruevski’s problems.”

Cross-border smuggling of everything from drugs to people is big business in and around Kumanovo, and a theory common among Macedonians is that police were ordered – for political reasons – to attack a criminal gang that had previously operated there with impunity.

The Kumanovo violence did increase EU and US attention on Macedonia’s crisis, and a western-brokered deal was agreed last month for an interim government to take over in January and prepare for early parliamentary elections in April, and for a special prosecutor to investigate the wiretap scandals.

Macedonians have little faith in an apparent “truce” between Gruevski and his critics, however, and even less that the snap vote will be free and fair.

“The West has given Gruevski time to fix things, to make sure he wins again in April,” said Zem. “Everything here is corrupt, and the elections will be no different.”