Lost at sea: the floating jacket that sparked a Mediterranean rescue mission

Seeing a jacket from a sunken migrant boat spurred Chris and Regina Catrambone to spend more than $7.5m setting up the Migrant Offshore Aid Station 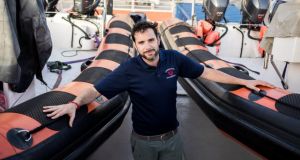 Two years ago Chris Catrambone, a US conflict-zone insurance businessman, set sail with his Italian wife, Regina, on one of the cruise ships that fill Valletta’s grand harbour. A short time after the couple returned from their Mediterranean break Catrambone called Martin Xuereb, a former chief of the Maltese defence forces. Catrambone told him that they had been south of Lampedusa, the Italian island at Europe’s southern boundary, when his wife spotted a jacket in the water. Their skipper told her it was probably from a sunken migrant boat.

“They were so shocked that Chris wanted me to help him set up a rescue service,” Xuereb says. “For me it was about breaking glass ceilings, looking beyond the horizon. And everyone we talked to thought it was a great idea, but no one wanted to commit any funds.”

The Moas search-and-rescue team is made up of experienced coast-guard and seagoing staff, and Médecins San Frontières is providing a doctor. The project, which Xuereb co-ordinates, offered its services to the Italian marine rescue co-ordination centre last year. “We got our first call after 48 hours at sea in late August 2014, and we saved 3,000 people in 60 days.”

Xuereb, who has had much contact with Irish Defence Forces, notes that there were periods in history when Irish and Maltese people left home in search of a better life. “You realise that these migrants now also have a past, present and want to have a future. They have siblings, want to have a family, and are no different from me or you.”

The foundation recognises that rescue is just one part of the equation. It also sponsors Migrant Report, a nonprofit project. “We in Moas focus on the immediate human aspect, and the premise that no one should die at sea,” Xuereb says. “ If you work from that point of view outwards, the decisions taken afterwards about these people’s future can only be just and fair. ”