Little cause for celebration in Croatia on cusp of EU accession 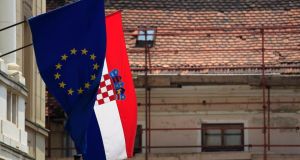 Joining the EU during a recession is bad enough but Croatia’s own economy is also in severe difficulty: there has been no growth in five years and unemployment is at almost 20 per cent. Photograph: Reuters/Antonio Bronic

Croatia may be just days away from setting off the fireworks in celebration of its entry into the EU, but Luka Zucko is not all that enthusiastic. The political science student at the University of Zagreb knows the Balkan state is entering the bloc at a time of crisis and the benefits of joining may not be seen for some time. “Maybe my kids will be able to benefit but not me,” says the 21-year-old.

For 14 years joining the EU has been Croatia’s main aspiration and the last decade has seen it involved in difficult accession talks that forced it to confront its painful past.

Now that it is on the cusp of joining, things don’t seem so great. “Croatians know they are joining at a very difficult time,” says Aidan O’Malley, who teaches Irish studies at the University of Zagreb.

“All the normal bounce effects like foreign direct investment are not going to happen. The climate is just not right,” adds Paul Stubbs of the Institute of Economics in Zagreb.

Joining the EU during a recession is bad enough but the country’s own economy is also in severe difficulty: there has been no growth in five years and unemployment is at almost 20 per cent.

Unsurprisingly, Croatians are having difficulty mustering support for entry into the EU. Just 20.75 per cent of voters turned out to elect MEPs to the European Parliament in April. Last year 43.5 per cent turned out for a referendum on joining the union, although two-thirds voted in favour of entry.

Croatia has doubters about the benefits EU entry could bring. Farmers in a largely underdeveloped agriculture sector feel under threat from anticipated reforms they worry will drive them out of business. There are also fears over a loss of sovereignty in a 28-state EU dominated by world powers.

But in the capital, where English is used with ease and prices are sometimes quoted in euro, many people are in favour of EU entry. Iva Lorkovic, who works in PR, hopes Croatia might be run better: “Politicians here do not work for the country; they are always working for themselves.”

Tackling corruption
The strict criteria set down by the EU during accession talks mean important reforms have been introduced. Among them are efforts to tackle corruption. Former prime minister Ivo Sanader was sentenced last year to 10 years in prison for taking bribes.

But the country still ranks far behind most EU states on Transparency International’s corruption perceptions index. It is, though, ranked ahead of Italy and Greece.

An open letter to German chancellor Angela Merkel in April by Croatian think tank the Adriatic Institute for Public Policy urged the German parliament not to ratify the country’s EU entry because of “rampant corruption”.

Croatia became the first country to have to meet EU standards on a new area of justice and fundamental rights. This encompassed co-operation with the UN’s war crimes tribunal in The Hague on handing over major figures involved in the Balkan war.

After some high-profile names, such as former army general Ante Gotovina, were handed over to the tribunal, Zagreb was deemed to have met the criteria on this point.

Gotovina’s eventual conviction was overturned on appeal and he returned home to a hero’s welcome.

Some wonder to what extent the issue has really been tackled. “There are double standards among the Balkan countries,” says Vesna Terselic of human rights group Documenta. “When it is our guys people say ‘they are not criminals’. When it’s their guys they say ‘they are criminals and must be punished’.”

There are also concerns that there have been missed opportunities. Terselic says civilian victims of the war who were sexually abused or who have missing family members are still seeking justice and compensation. Some Serb families have not been able to return to properties that were taken over during the war.

While Terselic would have liked such issues to have been addressed before EU entry, she says Croatia could become a regional leader by bringing the war legacy to an EU level. “If Croatia wants to take on the role of regional leader this is exactly the issue it has to deal with – how we can build a postwar Europe.”

There are other issues civil society groups do not want to see fading into the background once the fanfare dies down after this weekend. The EU must also keep up the pressure on Zagreb to implement laws that tackle bureaucracy, stamp out discrimination and continue to root out corruption, says Marina Skrabalo of Gong, which campaigns for human rights and transparency. “Now we are entering the EU we don’t want it suddenly becoming all about the economy.”