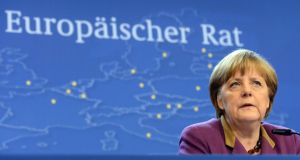 
A demand by France and Britain to ease the Syria n arms embargo to provide weapons to the rebels ran into resistance at the summit, prompting speculation that they might unilaterally break the EU ban in order to boost the opposition.

Although foreign ministers are set discuss the embargo at an informal meeting in Dublin next Friday and Saturday, diplomats said there was little prospect of a unanimous move to water it down.

The summit debate on Syria – on the second anniversary of the uprising against president Bashar al-Assad – came amid anxiety that any easing of the ban could inflame regional tension and spark an arms race with supporters of the Assad regime.

“There’s not a great deal of support for getting rid of the embargo,” said a diplomatic source.

German chancellor Angela Mekel and Austrian chancellor Werner Faymann were said to have taken a forceful strong line against any lifting of the ban.

The analysis in diplomatic circles is that those opposed to any relaxation will not waver and that France and Britain may break it on their own.

In the first instance, however, the two countries have pledged to work in concert with their Eu ropean partners and follow EU procedures through to the end of the review process.

Although the foreign ministers will examine next week whether to extend the embargo after the end of May, no decision is expected from these engagements as the meeting is informal.

The ministers have four options: to prolong the embargo; to let it lapse; or to ratchet it up or down.

Taoiseach Enda Kenny would not say whether he favoured steps to ease the ban and cautioned against jumpting to conclusions before all the facts were known.

“This is now two years since this conflict began and obviously has caused enormous disruption to over two million families, 70,000 dead, and the complexity both of the region and the supply of arms and weapons,” the Taoiseach told reporters.

“Obviously the opposition here is representative of a combined number of different sectors.”

In spite of mounting concern about the intensification of the conflict, French president Francois Hollande said he had received guarantees from the rebels that any arms delivered to them would end up in the right hands.

“In terms of delivering weapons . . . to have the best answer the opposition must give all necessary guarantees,” he said.

“It’s because we have been given those that we can envisage the lifting of the embargo. We have the certainty on the use of these weapons.”

“We have to be frank that what the international community has done so far, of course it has helped in terms of humanitarian assistance... but it hasn't overall worked in terms of stopping this conflict and achieving transition in Syria.