Kurds protest as Turkish ground forces stay out of battle 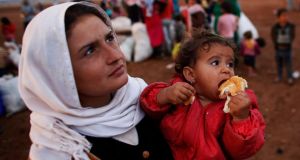 A Syrian Kurdish refugee and her daughter waits for transportation after crossing into Turkey from Kobani yesterday. Photograph: Murad Sezer/Reuters

Fighting between Kurdish forces and Islamic State militants for the Syrian border town of Kobani fuelled rising tension inside Turkey yesterday as thousands of protesters took to the streets to voice anger at the Ankara government’s inaction.

Following a warning from the Turkish president, Recep Tayyip Erdogan, that Kobani was “about to fall”, one man was reported to have been killed by a bullet to the head in Varto in the eastern province of Mus when police allegedly fired live ammunition.

Mr Erdogan, speaking in the eastern city of Gaziantep, said a ground operation was needed to defeat Islamic State, sidestepping accusations that he is unwilling to allow Kurds in Turkey to help their embattled kinsfolk in Syria or to deploy the army across the border because of the country’s historic enmity towards Kurdish separatists.

“I am telling the West – dropping bombs from the air will not provide a solution,” the president said to cheers from crowds of Syrian refugees in a speech that was translated into Arabic. He also tested the readiness of the US, Britain, France and other allies by calling for a no-fly zone and a secure land zone as well as training for moderate Syrian rebels.

If Kobani falls, Turkey is likely to face a massive backlash from its Kurdish population. Thousands of people have already arrived on the border from all over the country to offer their support. “If they take Kobani, we know they will come to Suruc [in Turkey],” said Ibrahim Akkus, watching from the nearby hillside.

Islamic State controls large parts of both Syria and Iraq and has ramped up its offensive in recent days despite being targeted by US-led airstrikes. On the Turkish side of the border, journalists heard warplanes before two large plumes of smoke billowed west of Kobani. But the air attacks appear to have done little to slow the insurgents.

Hours after two of the group’s black flags were raised on the outskirts of the town on Monday, the militants advanced into the town, said the local co-ordination committee.

“They’re fighting inside the city. Hundreds of civilians have left,” said Rami Abdurrahman, the director of the Syrian Observatory for Human Rights.

Kobani residents described seeing Islamic State fighters looking “relaxed” and walking freely in the streets. But those who entered were soon killed by Kurdish fighters more familiar with the locality.

“I don’t know where they were all coming from, but once they were killed, more Isis would come,” a 50-year-old man named Mahmoud said as he walked from Kobani to a nearby town.

“If I die, who will look after my children?” he asked. “Why is Isis coming to my land? The world has turned its back on Kobani.”

In Istanbul, hundreds of nationalists attacked an office of the pro-Kurdish Democratic People’s party with sticks and knives, trapping around 60 people inside the building. In another neighbourhood, pro-Kurdish protesters set fire to the building of the local Nationalist Movement party after shots were reportedly fired from there. – (Guardian service)