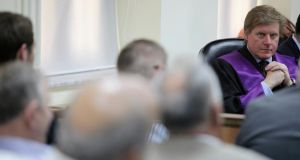 Special European prosecutor Jonathan Ratel during the trial in Pristina of five men who have been convicted of involvement in an international organ trafficking ring. Photographs: Hazir Reka/Reuters

They came to Kosovo from east and west, people poor enough to sell their organs for quick cash, and others rich enough to pay large sums to jump the queue for a new kidney.

Over several months in 2008, doctors at the Medicus clinic in Pristina, Kosovo’s capital, performed at least 23 illegal kidney transplants, removing them from desperate donors, mostly eastern Europeans, and giving them to ailing but wealthy westerners, predominantly Israelis.

Five Kosovar men were this week convicted for their involvement with Medicus, but it is thought to be just one link in an international network of illegal transplant clinics that is still in operation, working hand-in-glove with ruthless organised crime and people-smuggling gangs.

Medicus came under suspicion on November 4th, 2008, when a young Turkish man collapsed at Pristina airport before a flight back to Istanbul.

Doctors examining Yilmaz Altun saw a large, fresh wound on his abdomen, and discovered that his left kidney had been recently removed. Altun told police about Medicus, and when they arrived at the clinic they found an elderly Israeli man being prepared for a kidney transplant.

“They were promised modest sums of money, usually in the range of $10,000 to €12,000, in return for their kidney. Most were deceived into thinking that kidney transplantation was legal in Kosovo, when in fact it is not,” the judges said when explaining their verdict.

“Several donors were not paid as much as they had been promised, and at least two were cheated out of the entire amount and went home with no money and only one kidney. Some have encountered ongoing health problems.”

Jonathan Ratel, prosecutor for the EU’s rule-of-law mission in Kosovo, said that while donors were lucky to receive a couple of thousand euro, organ recipients from countries including the US, Canada, Germany and Poland paid more than €100,000 for a new kidney. Most recipients came from Israel, where organ donation is relatively rare due to religious concerns. “The sole and driving motive for this exploitation of the poor and indigent was the opportunity for obscene profit and human greed . . . this was a cruel harvest of the poor,” Ratel said.

According to the prosecutor, crime gangs are trafficking people for illegal organ transplants using routes and methods established for smuggling drugs, weapons and sex workers.

Threats and coercion are regularly used if a would-be organ donor changes his mind, he added. Ratel said he was satisfied with this week’s judgments: three Kosovar men received prison terms of up to eight years and two others got suspended sentences.


Alleged kingpins
But two alleged kingpins of the Medicus operation were not in court: Turkish surgeon Yusuf Sonmez and Israeli Moshe Harel, whom judges called “a key figure in the trafficking and organised crime aspects of this case, as the prominent facilitator or ‘fixer’.”

They deny the charges against them. Both men are under investigation in their home countries, but Ratel said he suspected Sonmez was now working in South Africa.

He believes the likes of Harel and Sonmez identify states with weak healthcare regulatory systems and try to establish transplant clinics there with local help.

“Medicus was one of a constellation of clinics operated by Sonmez, Harel and others. We found clinics in Azerbaijan and other places and we believe there may be one in South Africa,” said Ratel.

Five years after declaring independence from Serbia, as it seeks to show the world that it is a stable state with functioning rule of law, Kosovo continues to be dogged by the issue of organ trafficking.

Eight other people are being investigated in connection to the Medicus case, and separately an international team is looking into allegations that ethnic-Albanian guerrillas removed organs from prisoners at the end of their 1998-1999 war with Serb forces.

Marty said the case may well be connected to the Medicus allegations, but he declined Ratel’s request to testify in the trial. Ratel said he had seen “absolutely no evidence” linking the two cases.

1 One hundred Irish retailers for all your online Christmas shopping
2 Thousands of gardaí mount checkpoints and patrol parks, beauty spots
3 Large crowds gather on Dublin’s Grafton Street on eve of lockdown
4 Life under Level 5: Where can I go, who can I see, what is closed and what is open?
5 John Gilligan arrested along with two others in southern Spain
Real news has value SUBSCRIBE