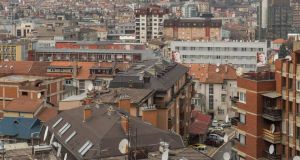 Pristina, the capital of Kosovo, a city of about 200,000 people. Photograph: Arild Vågen/Wikimedia Commons

Water supplies to almost half of Kosovo’s capital city Pristina were turned off on Saturday after police arrested three people on terrorism charges close to an artificial lake.

Two other men were arrested later in the day. All face terrorism charges, police said. Some of the suspects are allegedly linked to Islamic State.

The water supply company Prishtina said it had turned off its water treatment facility at Badovc Lake after the arrests, apparently to check for any contamination.

“We are checking the quality of the water and we will not restart until the tests say the water is clean,” spokeswoman Arjeta Mjeku said.

Ms Mjeku said the lake supplied 40 per cent of the capital with drinking water.

A police source, who spoke on condition of anonymity, told Reuters that two of the suspects had been arrested last year on suspicion of travelling to Syria.

Security officials say more than 200 people from Kosovo have gone to fight in Syria and Iraq and more than 30 are believed to have been killed and there are concerns over the potential threat posed by those who return.