News raises fears of disease spreading as number of cases hits 45, including 25 deaths 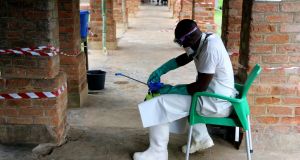 A health care worker wears virus protective gear at a treatment centre in Bikoro in the Democratic Republic of Congo. Photograph: AP

Two more cases of Ebola have been confirmed in the northwestern city of Mbandaka in the Democratic Republic of the Congo, health officials have said.

The report brings to three the number of confirmed cases in the city of 1 million people, raising the prospect of a wider outbreak than feared.

The DRC is one of Africa’s most fragile states, with millions threatened by hunger, disease and low-level conflict. Political instability has intensified following the refusal of Joseph Kabila to step down as president when his second term ended in 2016.

International aid is pouring in to reinforce health services, with a campaign of vaccinations due to begin on Sunday. The health ministry declared that it had activated an “action plan” in Mbandaka.

After visiting the city, which is 580km from the capital, Kinshasa, the health minister, Oly Ilunga, announced on television that all healthcare would be free. “Financial hurdles should not in any way be a brake to having access to healthcare, especially at a time of epidemic,” he said.

Prof Jean-Jacques Muyembe, the director general of the DRC’s National Institute for Biomedical Research, told the Guardian on Friday that “the situation had evolved overnight with the confirmation of two new cases” in the Wangata neighbourhood of Mbandaka.

“It is very concerning. It’s a big city. We are all doing everything we can, but nonetheless with Ebola there are always surprises,” said Muyembe.

The discovery of the first case in Mbandaka earlier this week was described as a “major gamechanger” by the World Health Organization. An emergency meeting of experts was held on Friday to consider the danger of the disease spreading to other countries.

“At the global level, the risk is currently low,” the WHO said.

Late on Thursday, the DRC health ministry confirmed 11 previously suspected cases of Ebola and two more deaths, taking the total number of cases, including 25 deaths, to 45.

All the deaths so far have occurred in Bikoro, a rural area about 120km from Mbandaka. The presence of the disease in more isolated areas has given authorities a better chance of preventing its spread.

Prof Muyembe said laboratory results released late on Thursday had confirmed the two new cases. He was unable to give any further details about whether the individuals knew each other. The aid agency Médecins san Frontières, however, said it was only aware of one new laboratory-based confirmation from Mbandaka.

Mbandaka is located on the banks of the Congo River, a major trade and transport route into Kinshasa, though experts said water transport between the cities could take weeks, slowing any potential spread of the disease. Air transport is limited and expensive.

Ebola has twice made it to Congo’s capital in the past and was rapidly stopped.

Ilunga said epidemiologists were working in the field to identify people who had been in contact with suspected cases, and authorities would intensify population tracing on all routes out of Mbandaka.

This is a major task even for medical services in developed countries, but the DRC is one of the world’s poorest countries.

Four times the size of France, the DRC has been chronically unstable and episodically racked by violence since it gained independence from Belgium in 1960. Hospitals, roads and electricity are all major problems, especially in remote areas.

In Mbandaka, medical staff have been issued with infrared pistol thermometers to check travellers for high temperatures, as well as soap and basins of water, and logbooks for writing down visitors’ names and addresses.

In the privately run port of Menge, health ministry workers were systematically checking people’s temperatures with thermometers. But Joseph Dangbele, a port official, said: “We don’t have enough of the thermometers, so people are crowding up and getting annoyed.”

On Thursday, a doctor at Mbandaka general hospital, who requested anonymity, said more than 300 people in the city had had either direct or indirect contact with Ebola.

Gaston Bongonga said: “Delegations come here and then go, but on the ground, you don’t see any change. They were all unable to hold back Ebola in Bikoro because they don’t do anything effective.”

Residents of Bikoro said there were only two checkpoints on a 100km stretch of road.

One said: “This isn’t effective because many people travelling by motorbike or on foot evade inspection.”

Ebola has been recorded nine times in the DRC since the disease first appeared near the northern Ebola River in the 1970s. It can cause internal and external bleeding.

More than 4,000 shots of a newly developed vaccine were sent by the WHO to Kinshasa on Wednesday.

The vaccine, developed by Merck, is still not licensed but proved effective during limited trials in west Africa, where the biggest recorded outbreak of Ebola killed 11,300 people in Guinea, Liberia and Sierra Leone from 2014 to 2016. – Guardian