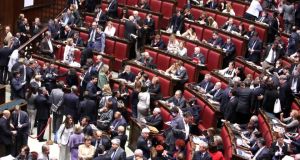 Members of the Italian parliament in Rome vote yesterday for a successor to Giorgio Napolitano. Photograph: Franco Origlia/Getty Images

Italy took a major step towards resolving the political stalemate that has blocked political life since the February general election when it re-elected outgoing state President Giorgio Napolitano (87) this afternoon.

Mr Napolitano’s seven-year term of office was due to expire next month when, in keeping with an oft-expressed desire, he intended to retire from public life.

However, he was persuaded to run again in order to resolve a political impasse which had seen parliament fail to elect a new president in five previous votes over the last three days.

Not only did the joint sitting of both houses fail to elect a new president but the abysmal flop of two high-profile candidates presented by the centre-left Democratic Party (PD), winners of the February election, threatened to provoke further instability.

In particular, the embarrassing flop experienced yesterday afternoon by former European Commission president Romano Prodi, betrayed by 70 to 80 voters from within his own PD party, prompted a profound, potentially irreparable crisis in the Democratic camp with senior figures including party leader Pier Luigi Bersani resigning office.

Given the PD were incapable of guaranteeing even their own votes, it seemed obvious that any PD candidate, irrespective of their merits, was destined to fail. That prompted an increasingly desperate search for a “unifying” candidate who might also prove acceptable to the People of Freedom (PDL) party of media tycoon and former prime minister Silvio Berlusconi.

In the end, the PD opted to persuade President Napolitano to stay on in office (presumably for limited period of time) for two obvious reasons. Firstly, his international profile is one of an experienced leader who guarantees Italian stability in a time of euro-land crisis, and secondly, despite his own centre-left background and occasional tensions with the centre-right during the last seven years, the PDL are still willing to work with him.

Many commentators argue that President Napolitano’s re-election may facilitate the formation of a new government, based on some form of PD-PDL co-operation, if not exactly a cross party “Grand” coalition along German lines.

The election of President Napolitano today, as well as the likelihood that this is a preamble to the formation of a PD-PDL executive, has inevitably prompted bitter criticism from the third major force on the current Italian political scene, namely the M5S protest movement.

Even as the ballot was ongoing in parliament yesterday afternoon, M5S supporters were outside, angrily shouting “Rodotà, Rodotà” in reference to their preferred choice, constitutionalist Stefano Rodotà.

As various deputies and senators from other formations exited from parliament, the protestors screamed abuse at them, calling them “buffoons” and much worse besides.

The charismatic M5S leader, ex-comic Beppe Grillo, is expected to stage a protest outside parliament later tonight, which in the current overheated climate risks developing into a scuffle with the expectedly heavy police presence.

President Napolitano is expected to be formally reappointed very shortly so “consultations” about the formation of a new government can resume. Once reappointed, he also has the right to dissolve parliament, a right that was (constitutionally) denied to him during the last months of his current mandate.

Difficult Italian presidential elections are nothing new. In 1971, it took 16 days and 23 votes to elect president Giovanni Leone. President Napolitano himself was not an agreed cross-party candidate seven years ago, but rather was elected almost exclusively by the centre-left.

If to some extent President Napolitano has saved the PD “bacon”, it remains clear that centre-right leader Silvio Berlusconi has emerged strengthened from this election, if only because of his opponents’ manifest shortcomings.

The last three days in parliament, too, seem to provide incontrovertible proof that Italian democracy, ailing from a disease perhaps first contracted in 1946-48, is in bad need of a stint in intensive care.