Italy in mourning as scale of devastation becomes clear 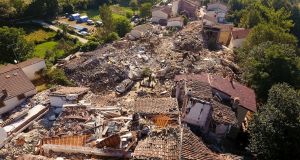 Aerial view of the damage in the village of Saletta in central Italy, where 22 of the 45 inhabitants died in Wednesday’s earthquake. Photograph: AP Photo/Localteam

Three days after the violent earthquake that shook central Italy on Wednesday morning, the full picture of the devastation is becoming ever more clear. By yesterday evening, the death toll had risen to 278 while it is now estimated that 2,500 people have been left homeless.

Furthermore, some 238 people have now been rescued from collapsed buildings while 388 people have been hospitalised with serious injuries.

The Italian government declared today a national day of mourning, and a state funeral for some of the victims will be attended by Italian president Sergio Mattarella and prime minister Matteo Renzi, who declared a state of emergency , authorising an initial 150 million in aid and cancelling residents’ taxes.

Arts minister Dario Franceschini also said yesterday that 293 works of art and churches have been damaged.

Yesterday began literally with a bang as a 4.8-magnitude after-tremor struck at 6.20am, causing further damage to buildings but no loss of life. This was the 1,059th after-shock since Wednesday, one which further isolated Amatrice, where 218 of the 278 victims died. That tremor damaged a bridge on the road into Amatrice, leaving only one of the three access roads open.

Town mayor Sergio Perozzi asked people yesterday to stay clear of the “red zone”, the worst-affected area of the town, and to register with the civic authorities in the tented village of temporary accommodation. He also said that, at this point, there are still 15 citizens missing.

While no one was killed at the school, which occurred at 3.36am, magistrates want to understand why the building did not withstand the earthquake.

The obvious implication is that the school, and indeed many other modern buildings in Amatrice, have been illegally built, with builders claiming a “seismic-proof” prices but actually using non-seismic materials and methods.

In reality, correct seismic building increases a construction budget by 50 per cent, as compared to traditional non-seismic methods.

In the case of the Amatrice primary school, an extra 1600,000 was spent just to meet anti-seismic regulations. Furthermore, upon completion the project was approved by a number of state-employed seismic experts.

Interior minister Angelino Alfano expressed his satisfaction with the overall rescue operations, pointing out that there are no more missing people in the region of Le Marche.

“This has been a lay miracle. [The rescue operation] has worked perfectly . . . In the battle between man and nature, nature will always win. Let us not be hypocrites, we are a seismic country. If we had anything to apologise for, we would . . . but the rescue machine was able to cope.”

If a town like Amatrice seems to be over-run by the 5,400-strong rescue service, just up the road in some of the smaller hamlets, things are much quieter.

In Accumoli, the epicentre of the quake, 11 out of its 150 inhabitants were killed while 22 of the 45 inhabitants in nearby Saletta also died.

Saletta is not so much a village as a line of houses. Walking up the road past the collapsed houses, I notice a whole extended family sitting around a long picnic table in a small field off the road.

Surreal image It is a surreal image, and I pause for a moment thinking that I might capture the image. This is intrusive but the image is too strong.

However, before I get to take any photograph, an angry young man runs at me with a dinner knife in his hand.

He makes it very clear that he does not want any pictures taken. People are distraught and that is more than understandable. This is a living nightmare.

When a CNN TV crew arrived here last Wednesday morning, having been blocked from travelling to Amatrice, they came across distraught residents, many of them still in their pyjamas, desperately trying to dig neighbour Andrea out of the rubble that was once his house.

They had identified where he was and were trying to dig him out, pulling bricks, chairs and even wardrobes off him.

As the slow digging went on, the neighbours continued to talk to Andrea, telling him to hold on, that they would get him out.

However, they had no lifting equipment and before the rescue workers and diggers arrived, Andrea’s body could take it no more and he stopped replying to his neighbours. Just one of the 22 dead in this short row of houses.

There were so many dead that Andrea’s orto, his fruit and vegetable patch, was turned into an open-air mortuary.

When you walk around the orto now, alongside Andrea’s splendid tomatoes there are little piles of rubber medical gloves, still there from the traumatic night.

Today, too, in Ascoli Piceno, there will be a state funeral for 46 victims, including many children.