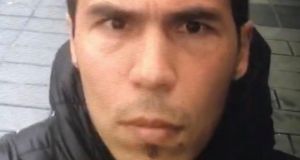 The gunman suspected of killing 39 people in an Istanbul nightclub in Turkey in the early hours of New Year’s Day has been caught in the city’s Esenyurt district, the Hurriyet newspaper website and other media reports have said.

The reports could not be confirmed, but Hurriyet said the man, who media quoted police as saying had operated under the cover name Ebu Muhammed Horasani, was caught in an operation along with his son. The district where he was found is on the European side of the city.

Dozens of people have previously been detained in connection with the attack for which Islamic State has claimed responsibility, saying it was revenge for Turkish military involvement in Syria.

On January 1st, the attacker shot his way into the Reina nightclub and opened fire with an automatic rifle, reloading half a dozen times and shooting the wounded as they lay on the ground.

The report said he had been staying in the house belonging to a Kyrgyz friend.

The man identified as the suspect had been on the run since the attack. Hurriyet newspaper and other media have identified the suspect as Abdulkadir Masharipov, an Uzbek national.

The suspect was to undergo medical checks before being taken to a police headquarters for questioning, the paper said in its online edition. Dogan news agency published an image showing a bruised, black-haired man in a grey, bloodied shirt being held by his neck. Private NTV television said he had resisted arrest.