Is Europe opening its eyes to the unfolding migrant crisis? 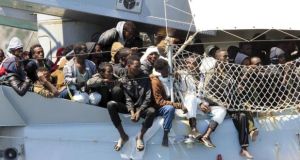 Migrants on board of Italian Navy ship ‘Chimera’ before disembarking in the southern harbour of Salerno. Photograph: Ciro De Luca/Reuters

This week the world looked on in horror as images of desperate migrants fleeing North Africa flashed across TV screens.

The European Union has long grappled with a migrant crisis on its doorstep, but many believe it took a single event like the sinking of a boat carrying up to 900 passengers off the coast of Libya last weekend to grab the world’s attention and spur global leaders into action.

The issue dominated Monday’s meeting of EU foreign ministers, who were joined by justice ministers from their member states for a crisis meeting in Luxembourg.

Italian prime minister Matteo Renzi appealed to Europe “not to close its eyes” to the crisis unfolding in the Mediterranean, invoking the EU’s failure to intervene in the Balkans 20 years ago.

At the behest of Renzi and others, European Council president Donald Tusk convened an emergency summit on Thursday.

Following more than five hours of talks, EU leaders agreed to triple funding for Frontex, the EU’s border protection agency, with a number of countries, including Ireland, Britain and Germany pledging naval vessels and resources to the operation.

But the summit failed to agree a resettlement or relocation programme for refugees, instead committing to a “pilot” programme which will be voluntary. Officials stress that the European Commission – which has been pushing the EU to make resettlement obligatory – will present a plan in the coming weeks, but whether member states will participate is another matter.

Britain has already ruled it out, and many eastern European countries struggling with their own immigration issues from the East. Similarly, there has long been an uneven distribution of responsibility for asylum-seekers, with Sweden and Germany accepting the vast majority of refugees.

There are also question marks over the legal mandate of Triton, the EU’s search and rescue operation in the Mediterranean run by Frontex. While the tripling of money represents a huge increase in resources, it is unclear if rescue ships will be permitted to stray into non-EU territorial waters.

Similarly, the head of Frontex itself has said that the agency’s mission is border control, not search and rescue, though experts have pointed out that maritime law imposes an obligation on vessels to respond to another boat in distress.

The details of how Triton will operate, and how member states, including Ireland, will interact with the EU system, will be worked out in the coming weeks.

In the meantime, human rights groups have argued that the EU’s response is too focused on law enforcement and border management, and have instead called for a comprehensive review of immigration policy and a real commitment to create an EU-wide asylum policy.

Others argue that the European Union cannot possibly control the “push” factors that cause people to embark on the Mediterranean in the first place.

As EU Council President Donald Tusk said ahead of the summit, there are “no quick-fix solutions” to the crisis, but for the hundreds of thousands of refugees fleeing North Africa and the Middle East, they will be hoping that Thursday’s summit was a start.