Interpol search for parents of girl found in Roma camp

DNA tests revealed child, called Maria, was not related to the couple she lived with in central Greece 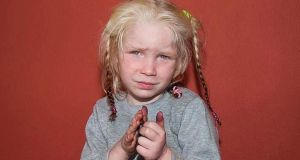 Greek police have released the girl’s photo in the hope of identifying her. Photograph: Reuters

Greek police have asked Interpol to help them track down the real parents of a blonde girl with green eyes who was found in a Roma camp in central Greece.

Known as Maria, the four-year-old was spotted peeking from under a blanket at a Roma settlement near the town of Farsala during a police sweep on Wednesday for suspected drug trafficking.

She speaks just a few words in the Roma dialect and Greek, and police think she may be of northern or eastern European origin, possibly from Scandinavia or Bulgaria.

Police have sent Interpol a file with all the evidence they have on the girl, including DNA samples, to seek a possible match with its records on missing children, a police official said.

They have also contacted international groups and charities that deal with lost or abducted children.

Photos released by police of Maria staring blankly at the camera with muddy hands and scruffy pigtails have dominated the media.

Parallels were drawn to the case of Madeleine McCann, who vanished while on holiday in Portugal in 2007, when she was three years old.

DNA tests have shown the couple in the Roma camp with whom Maria was living were not her biological parents.

The 40-year-old woman and 39-year-old man have been arrested and charged with abducting a minor, and police are investigating whether the girl was a victim of trafficking.

During questioning, the couple gave at least five conflicting accounts of how the child ended up with them, including that she was found outside a supermarket, police said.

The woman had two different identification documents and other papers suggested the couple had up to 14 children, but six were registered as having been born within less than 10 months. They received €2,790 a month in child benefits, a police source said.

“This has never happened before - to have found the child and to be looking for the parents,” said Natalie Karakouliafi of the Smile of the Child charity, which is looking after the girl.

In response to an international appeal, it has received more than 5,000 calls since yesterday from people looking for their missing children or offering clues. The charity received reports that the girl was forced to beg for money in the streets but its director, Costas Giannopoulos, said she was in good health.

“She was frightened and cried herself to sleep. She is not looking for anyone and she is devoted to play,” he said.

“It has shaken everyone and has helped bring to light a major problem - just how easy it is to traffic children”.

Local police chief Vasilis Halastis told Greek TV: “We’re always searching for lost children. In this case we’re searching for the opposite: the biological, natural parents. This is unprecedented.”