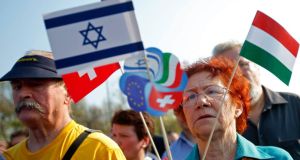 Participants in the March of the Living walk in Budapest last month honoured more than half a million Hungarian Jews killed in the Holocaust during the second World War. Photograph: Reuters/Laszlo Balogh

The anti-Semitism that many fear is on the rise in Hungary struck close to the country’s controversial government this week. Ferenc Orosz, a member of the ruling Fidesz party and head of an anti-racism group, was attacked after asking Budapest football fans to stop chanting support for Hitler and Mussolini.

In response, they called him a “Jewish communist” and as he left the stadium, one man shouted “Sieg heil!” as another punched him in the face, breaking his nose.

Orosz is expected to attend tomorrow’s gathering in Budapest of the World Jewish Congress (WJC), the most important body representing international Jewish communities and organisations, and Prime Minister Viktor Orban will address the opening ceremony. The president of the WJC, Ronald Lauder, wrote recently that it was meeting here “to send a strong signal that Hungary – home to the third-largest Jewish community in the European Union – is on a dangerous track”.

Since Orban took power in 2010, “Hungary has made international headlines for being a xenophobic and increasingly anti-Semitic country,” Lauder wrote. Orban, he said, was a leader who “seems to have lost his political compass” and “panders to the far-right fringe of Hungarian politics”.

Fidesz has long wooed Hungary’s nationalist voters around election time, but the issue has become more stark, and many say much more dangerous, since the rise to prominence of the far-right Jobbik party.

Jobbik is the third-biggest group in Hungary’s parliament, having taken 17 per cent of the vote in a 2010 election, and its anti-Roma and anti-Semitic rhetoric appeals to those looking for someone to blame for Hungary’s economic woes and social tensions.

Orban has condemned Jobbik’s most controversial comments, and the government banned a far-right protest planned for Budapest this weekend and prevented bikers holding a rally called “Step on the Gas” on the same day as a Holocaust memorial march last month. But other acts and omissions of Orban’s government, and his pledge to build a patriotic Hungary based on conservative national traditions, could be seen as what Lauder described as “a subliminal message to Jobbik supporters”.

The EU and US have criticised sweeping reforms which they believe undermine Hungarian democracy, prompting Orban to aggressively denounce foreign “meddling” in Budapest’s affairs. Monuments are springing up to Miklos Horthy, the authoritarian who allied Hungary with Hitler, and the school curriculum now includes several writers of dubious literary merit and extreme right-wing views.

Orban’s office said he would use tomorrow’s speech to the WJC to “respond determinedly to charges of anti-Semitism made against Hungary, the Hungarian people and the government”.

1 Coronavirus: One more death in Republic as expert warns house parties are ‘disaster’ for containment
2 George Floyd death: Man shot and killed by law enforcement in Kentucky
3 Six counties free of new cases of Covid-19 over past week
4 Gardaí disperse crowds gathered at coastal beauty spots
5 How lockdown has helped us to save money - and find new ways to spend it
Real news has value SUBSCRIBE