How Russia’s sanctions are impacting countries 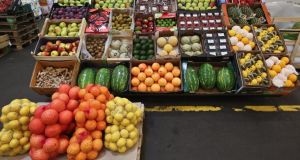 Fruits are for sale at the Agro-Food Market in Bronisze near Warsaw in Polandtoday. Russian president Vladimir Putin lhas ordered agricultural import bans on countries that have levied economic sanctions against Russia for its role in the separatist fighting in Ukraine’s east. Photograph: Rafal Guz/EPA

The European Union and the United States are tightening sanctions against Russia, targeting its energy, banking and defence sectors in the strongest international action yet over Moscow’s support for rebels in eastern Ukraine.

Below are recent comments and decisions showing the impact on European companies:

* Rheinmetall slashed its 2014 operating profit target after the German government withdrew its approval for a contract with Russia and the group shifted some of its automotive business to a joint venture.

* Russia will ban all imports of food from the United States and all fruit and vegetables from Europe, the state news agency today.

* German airport operator Fraport said the crisis in Russia and the prospect of further sanctions being imposed has led to considerable uncertainties regarding its stake in St. Petersburg airport.

* UniCredit, the banking market leader in central and eastern Europe, said the sanctions would have only a “marginal“ impact on its business there. Its regional subsidiary Bank Austria forecast solid profits in Russia despite the sanctions, thanks in part to its ability to raise money locally, though it warned of lost opportunities.

* Russia‘s prime minister threatened to retaliate for the grounding of a subsidiary of national airline Aeroflot because of the EU sanctions, and one newspaper said European flights to Asia over Siberia could be banned.

* A low-cost airline run by Russian national carrier Aeroflot, Dobrolyot (Good Flight), said it would suspend all flights after its plane lease agreement was cancelled when the EU slapped sanctions on Moscow.

* Part-nationalised British lender Royal Bank of Scotland said it had placed restrictions on its lending in Russia following developments in Ukraine.

* Adidas, the world‘s No.2 sportswear firm, cut its revenue and profit targets for this year and scrapped them for next year, blaming a plunge in sales at its golf business and its exposure to a weak Russian market.

* The head of Russia‘s second-largest oil producer, Lukoil , said the sanctions would force the company to reduce its investments due to limited access to funds.

* Italy‘s Enel is not considering the sale of its Russian assets at the moment, the utility‘s ehief executive Francesco Starace said. “It is not wise to sell assets in Russia at this moment,“ Starace said in a conference call.

* German retailer Metro AG said conditions were still not right to list a stake in its Russian cash-and-carry business, which was postponed in March due to the Ukraine crisis.

* French oil major Total said it had stopped buying shares in Russia‘s Novatek when a Malaysian airliner was shot down over Ukraine, but it was still too early to gauge the impact of the sanctions.

* Oil and gas producer BP reported a sharp rise in second-quarter profits but warned further Western sanctions on Russia could harm its business there and its relationship with Russian state oil company Rosneft.