How European Commission made blunder of Northern Ireland protocol 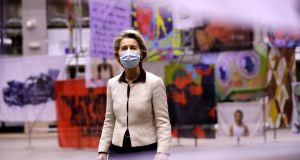 European Commission president Ursula von der Leyen: The bulk of staff are working from home. Many decisions are adopted by written procedure and decisions are “adopted” if commission members do not request changes or object within a set time period. Photograph: Olivier Hoslet

It took one week for a sequence of events to play out, culminating in a rushed EU regulation that put a hard-fought and delicate Brexit compromise on Northern Ireland in jeopardy – by accident.

The first domino was tipped on Friday, January 22th, when the pharmaceutical company AstraZeneca informed EU officials that the number of vaccine doses it expected to deliver by the end of March would be 60 per cent lower than thought.

Amid an outcry from capitals and the European Commission, AstraZeneca chief executive Pascal Soriot gave an interview in which he indicated there were currently no such problems in “the UK supply chain”.

The suggestion that doses made by factories in Britain were for the UK market alone was news to Brussels – after all, initial vaccines given in the UK had been made in the Netherlands and Germany.

By Monday, the EU was announcing plans for a power play against pharmaceutical companies. They would be required to notify national governments of any vaccine doses they planned to export out of the EU. This was described as an “export transparency mechanism”, to get “clarity” on where doses were going.

When ambassadors of EU member states in Brussels met to discuss the issue on Wednesday, powerful member states made it clear that they wanted more than mere “transparency”.

France and Germany supported controls on exports, not just oversight, according to diplomats. With domestic political pressure mounting over vaccine delays – and elections looming in Germany – Paris and Berlin wanted an agreement that would allow them to stop vaccines leaving EU countries for elsewhere if their citizens, from their point of view, were getting stiffed on orders.

From that point on, the proposed regulation hardened into a “transparency and authorisation mechanism”. It was no longer just about oversight: pharmaceutical companies would need the permission of national governments to export vaccines.

On Friday morning, drafts of the regulation were still moving back and forth between commission officials. The team of health commissioner Stella Kyriakides had input, as did the team of president Ursula von der Leyen. But for the trade document, the main co-ordinating office was that of Valdis Dombrovskis – the commission vice-president who took over the brief of Irish commissioner Phil Hogan when he resigned last year.

At a certain point, due to concerns that Northern Ireland could become a loophole that would make the regulation useless against exports to Britain due to the open border, the reference to article 16 was included in the draft.

The cabinet of Dombrovskis was “the lead” on the regulation, according to a commission spokesman. However, the Latvian has pushed back.

“From a trade perspective, there were concerns about unintended consequences of using such a mechanism,” Dombrovskis said in a statement. “But there were overriding considerations of public health. DG Trade [department of trade] therefore acted at the request of and with inputs from relevant cabinets and services at the commission to address those public health considerations.”

Whoever was to blame for including article 16 to start with, at Friday lunchtime, there was still a chance that someone could call “halt”.

There are no shortage of people with deep knowledge of Ireland and the protocol who could have spotted the danger. Senior trade official Sabine Weyand and von der Leyen’s deputy chief of cabinet, Stéphanie Riso, both had prominent roles in the Brexit talks. Ireland’s commissioner Mairead McGuinness would usually be expected to weigh in on any matter of particular concern to the country she knows best.

But the oversight failed. It was Friday afternoon, the regulation was being rushed through, and the window of opportunity for scrutiny was narrowed by procedural shortcuts.

The bulk of the commission’s staff are working from home due to the pandemic. Many decisions are adopted by written procedure, meaning that decisions are “adopted” if commission members do not request changes or object within a set time period after a draft Act is made available to them.

In this case, when the regulation was deemed ready it was emailed out to the relevant top officials. Roughly half an hour later, with no objections forthcoming, it was published online as adopted “in principle”.

The regulation was also adopted under emergency procedure. Heavily relied upon during the pandemic, this mechanism allows the commission to temporarily introduce measures that require swift action – without formally consulting member states.

That meant that Irish officials were only notified by the commission that article 16 had been used after the regulation had been published and journalists had been briefed.

Eagle-eyed reporters began posting screenshots of the relevant paragraphs on Twitter, spreading alarm in Dublin, London and Belfast. Roughly simultaneously, a top official in Leinster House strode into the office of Taoiseach Micheál Martin, who almost immediately picked up the phone to call von der Leyen.

Frantic phone calls between Brussels, Dublin and London followed. Beyond Ireland, officials in other member states were livid that the commission, in a botched attempt to fix one crisis, had set off another. “Did member states not ask last Wednesday,” said one diplomat. “We’re behind you, but don’t make it worse?”

Within hours of its publication, the regulation had been retracted. A press release appeared near midnight: “The commission is not triggering the safeguard clause.” A new version of the regulation, without article 16, was formally adopted in the following hours.

But much of the damage had already been done.