Building west of Vienna to be turned into apartments, says state media 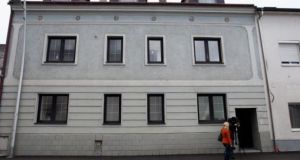 The house where Josef Fritzl imprisoned his daughter in a cellar for 24 years and fathered seven children with her. Photograph: Getty Images

The Austrian house where Josef Fritzl kept his daughter captive for 24 years and fathered seven of her children has been sold, according to the liquidator of his estate.

The house in Amstetten, west of Vienna, was sold for €160,000 Walter Anzboeck said.

State broadcaster ORF cited innkeeper Herbert Hauska as saying his wife and a business partner bought the building and will turn it into apartment units.

He said it is time “to bring down the curtain” on the house’s past.

Fritzl imprisoned and repeatedly raped his daughter Elisabeth until his crime was revealed in 2008.

He was sentenced in 2009 to life imprisonment for incest, rape, coercion, false imprisonment, enslavement and for the negligent homicide of one of his infant sons.