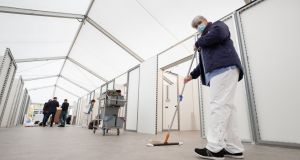 The installation of an auxiliary hospital unit for Covid-19 patients at Verviers, Belgium. Photograph: Benoit Doppagne/Belga/AFP via Getty Images

Hospitals are running out of beds across Europe and struggling to tend to patients as a surge of coronavirus infections, including a rise in cases among staff, overwhelms intensive care units.

Authorities in Belgium have warned that all of its intensive care beds could be full within a fortnight, and a suggested transfer of some patients to the Netherlands was rebuffed as the Dutch have also run out of hospital capacity and began airlifting patients to Germany last week.

“At the moment there are no possibilities to offer assistance,” said Ernst Kuipers of the Dutch National Acute Care Network.

In the Hague ambulances have been “driving in circles” unable to offload patients as hospitals cannot take them, Ingrid Wolf of the major hospital group Haaglanden Medisch Centrum told local media.

She appealed to anyone with a background in care to volunteer to help out. “We are in the middle of a tsunami. We are receiving more patients and have fewer staff than during the first wave.”

The Albert Schweitzer hospital in Dordrecht in the western Netherlands said it had no choice but to shut its doors to coronavirus patients.

“Every bed in the hospital is taken. Every day there are significant numbers of staff who have to report sick because they themselves have the coronavirus,” the hospital’s chairman, Peter van der Meer, said in a statement. “Our hospital is cracking and the system is cracking.”

Head of the Brussels region Rudi Vervoort warned of “runaway numbers” of Covid-19 cases, adding that “a major issue is the risk of the collapse of the hospital system of our country”.

Staff at some Belgian hospitals have been asked to continue working if they can even if they test positive for the virus to avoid the health system buckling, and regional authorities have appealed for nursing and medical students to volunteer to help out.

There are also shortages of police to enforce new restrictions introduced to curb the spread of the virus, and of teachers in schools due to the numbers of staff who are sick or in quarantine.

Mark Noppel, the chief executive of the University Hospital of Brussels, tweeted that it was seeing a repeat of March 2020 “despite many warnings”, and was rushing to kit out additional intensive care beds.

“ANGRY that we were unable to avoid this predicted scenario,” he wrote.

Infections are soaring both in countries that were hard-hit in spring and those that escaped the worst of it until now.

Poland is to convert its national stadium into a 500-bed field hospital as authorities shut schools in hotspots, banned weddings and ordered restaurants to close at 9pm.

Field hospitals have been constructed in Verviers in Belgium and the Asturias region in Spain, where soldiers put up the kind of medical tent usually used on a battlefield to conduct Covid-19 tests in the carpark of the overwhelmed Cabueñes hospital.