Youtube footage of the moment shots were fired in Bataclan venue has surfaced. The American band Eagles of Death Metal were in the middle of their set at the time. Video: PixableVideos Youtube 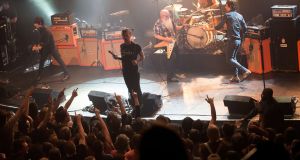 A picture taken at the Eagles of Death Metal gig at The Bataclan Theatre in Paris a few moments before the attacks. Photograph: Marion Ruszniewski/AFP/Getty Images

Survivors of Friday night’s terror attacks at the Bataclan Theatre in Paris have taken to Facebook to recount their experiences.

Eighty-nine people were killed when Islamic State militants targeted a show by Californian rock band Eagles of Death Metal as part of a series of co-ordinated attacks across the city.

A post on the band’s Facebook page has drawn thousands of comments, including many from concert-goers who made it out of the theatre alive.

“They tried to kill me and my wife while dancing in front of our favourite band, thankfully they failed,” wrote Maxime Dourlens. “We saw what no one should have to see.”

Claude Pfeiffer, another user who said he was at the concert, said he was lucky to only be wounded, but “some friends are dead, it’s hard to realise that horror”.

“I hope you will in the next years come back to Paris, we have to win against fear and violence,” he said.

Londoner Mark Backwell travelled from England to see the gig and was shot twice in the attack. He thanked French fire services, police and paramedics, as well as a woman he identified only as “Katie”, who stayed with him when he was wounded.

While the band is now home safe, we are horrified and still trying to come to terms with what happened in France. Our...

Posted by Eagles Of Death Metal on Wednesday, 18 November 2015

“I would especially like to give my thanks to a lady called Katie, who was holed up in a back office in a bank or post office near the Bataclan with me and who kept pressure on my shot arm to staunch the blood, even though she was desperately worried because she couldn’t raise her boyfriend on the phone (she did eventually, to both our relief),” he said.

“She stopped me losing blood and falling into unconsciousness or worse. She was a marvel to me.”

Concert-goer Loïc Wiels was “down in the crowd on that terrible evening and there’s no words to describe what we went through”.

Addressing the band, he said: “There’s no more words to say how sorry I am for the loss of your friends and crew members. Some of my own friends knew some of them too, which makes the loss even heavier on my mind.

Janina Adamao said she was able to escape at the beginning of the shooting and that a happy evening “turned into hell”.

Many others highlighted the good atmosphere at the concert prior to the “hell on earth” which followed. “It was a show to remember. I will never forget the communion and joy before the attack,” said Arma Ageo, while another commenter named Georges Bouchelaghem said he had a hard time coming to terms with the events.

Lorelei Fisher recounted how she hid behind cases stored on the stage, along with her boyfriend and another man. “We hide there for over an hour [SIC]hoping the killers wouldn’t find us.”

A bomb exploded beside where Ms Fisher and the two men were hiding. “The piled up boxes and gear protected us from being shredded to pieces. In a way, our lives were saved because of you,” she said.

Others commented on the compassion shown by the people of France in the wake of the attack. “Without them, I don’t think we’d be alive,” wrote survivor Tony Scott.

Many signed off comments with the title of the band’s debut album: “Peace, Love and Death Metal”.

The full statement from the band, along with the comment thread, can be viewed here.