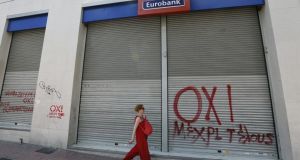 A woman walks by a closed Eurobank branch spray-painted with a NO graffiti in Athens. Photograph: Yannis Behrakis/Reuters

Ahead of their first referendum in over 40 years, Greeks are bracing themselves for what polls indicate will be a knife-edge result and one that that will determine the country’s path within the euro zone.

Campaigning in the referendum, announced just last weekend by prime minister Alexis Tsipras, officially concluded last night, with both sides hosting rallies within close distance from one another in central Athens.

Mr Tsipras’ government is calling for a No vote in the referendum, which will ask citizens if they agree or disagree a proposal from the country’s lenders that the lenders say is no longer on the table.

One poll published today in the official newspaper of Mr Tsipras’ Syriza party put the Yes vote at 45.5 per cent, just a half a percentage ahead of the No vote. Similarly, other polls show the result on a knife edge, with the gap between both sides at less than one percentage point.

On their front pages, most of the country’s main newspapers openly called for a Yes in the plebiscite, the first since 1974, when Greeks voted to abolish the monarchy.

“Yes to Europe, democracy and security,” said liberal-conservative Kathimerini, above a photograph of an evzone presidential guard marching past a Yes poster.

Calling for a “Yes to Europe, to Greece”, centrist To Vima placed its headline above a photograph of pensioners trying to gain entry to a bank, which were shut for normal business after capital controls were imposed this week by the government.

The headline on left-leaning Efimerida ton Syntakton, the only major title supportive of the government, read “I remember: five memorandum years without dignity or prospects,” next to photographs showing outstretched hands reaching for a bag of vegetables, queues outside dole offices, police brutality and previous prime ministers.

The message on Avgi, the organ of Mr Tsipras’s Syriza party, was a simple OXI (no), written in large, capital letters.

At the final No rally last night, Mr Tsipras told what was described as a “sea of people” at the largest rallies seen in Athens in many years, that the vote was “not deciding about staying in Europe. We are deciding about living with dignity in Europe, working and prospering in Europe. For all of us to be equal in Europe”.

Voting in 4,800 polling stations begins at 5am Irish time and will close twelve hours later. The earliest indication of the final result is expected at 7pm Irish time.

Voters will be given two ballots: One containing the referendum question and a blank one for those who wish to abstain.

Voters must place a cross “+” (the use of an “x” will spoil the vote) in either the No or Yes box. For the referendum to be valid, turnout must be at least 40 per cent.

A Public Issue poll published today in Avgi showed support of the No side highest, at 71 per cent, among the 18 to 24 age group. On the other hand, the over 65s are most likely to vote Yes, with 56 per cent of respondents indicating this in the poll.