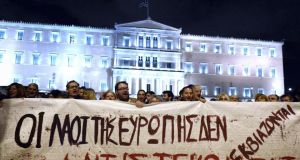 People hold a banner reading “people of Europe won’t be blackmailed, they will resist” in front of the greek parliament in Athens in support of the new anti-austerity government’s efforts to renegotiate Greece’s international loans. Photograph: AFP Photo/Getty Images

Although they come from very different backgrounds and have very distinct personal and political styles, Alexis Tsipras and Yanis Varoufakis, the two unconventional figures who have come to represent Greece’s new political face at home and abroad, can thank the financial crisis – and each other – for where they now find themselves as the country’s prime minister and finance minister.

Until recently, Tsipras was by far the better known of the two within Greece. The 40-year-old civil-engineering graduate whose first flirtation with politics was at secondary school, where he played a prominent role in a wave of student sit-ins against a proposed education reform, he rose to national prominence in 2006, when he came third in the race for Athens mayor. Two years later he was elected leader of the leftist Syriza party, which he then transformed from the smallest to the largest grouping in parliament in just over five years.

In a political culture dominated by seniority, formality and dynasties, Tsipras’s biggest assets were his youthful looks and laid-back approach, characterised by his rejection of neckties.

A professor of economic theory at Athens University, Varoufakis, who appears much younger than his 53 years, had no significant public profile before the crisis broke. He was not identified with Syriza, either, having served as an economic adviser to George Papandreou, leader of the centre-left Pasok party, from 2004 to 2006.

A dogged critic of the rationale behind the country’s troika bailout in 2010, Varoufakis built up an impressive following through his books and his blog and on Twitter, displaying an eloquence, expertise and intellectual rigour unmatched within the anti-memorandum camp in Greece and the Greek left in particular.

The relationship between Tsipras and Varoufakis is more recent in origin and was forged after the 2012 elections, when Syriza became the main opposition party.

The economist has clearly played a key role in putting Tsipras on a more pragmatic path, organising a watershed talk at the University of Texas at Austin, in 2013, when the Syriza leader said Greece’s problems could be solved only within the euro zone and its institutions.

As he led his party to power for the first time, Tsipras clearly required Varoufakis’s communicative skills. With his finance minister now eclipsing everyone else in the government at home and abroad, he’s probably got much more than he bargained for. Nevertheless, Tsipras has “absolute confidence” in Varoufakis, according to a government source.

This week Greeks were as engrossed as everyone else in the performance of the two men on their European tour. Although some on the right and centre lashed out at what they saw as Varoufakis’s reckless statements and shoddy sartorial choices, he did manage to impress many non-Syriza supporters, some hardened cynics among them, with his forthright and passionate approach at press conferences in Athens, Paris and Berlin.

Greeks seem prepared to give Tsipras and Varoufakis a chance to change where others have failed. A sign of that willingness could be seen on Syntagma Square in Athens on Thursday night, where for the first time that anyone can remember an anti-austerity demonstration took place that was in favour of the government.