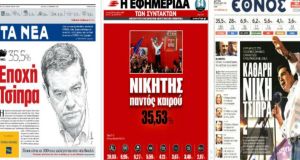 The front page of Greek newspapers the Ta Nea, the Efsyn and the Ethnos on September 21st, 2015.

Greek prime minister-elect Alexis Tsipras has reaffirmed his dominance on the political landscape, but now faces the daunting task of building consensus in a fractious society traumatised by years of austerity, local media said on Monday.

On the morning after Tsipras stormed to victory in snap parliamentary elections, Monday editions of Greek newspapers said Tsipras was given a ‘second chance’ to see through reforms and take ownership of a multi-billion euro bailout with lenders.

Bagging 35.5 per cent of the vote, Syriza, which was catapulted to prominence in the aftermath of Greece’s crippling economic crisis post-2010, has proven it is not a passing fancy of Greeks in a knee-jerk reaction to years of hardship, they said.

He has to steer the country through reforms demanded in the bailout, the recapitalisation of banks, an economic recession and a potentially explosive migrant crisis, the centre-left Ta Nea newspaper said in an editorial.

“That would be to succeed in a field where he has not distinguished himself so far, that of governance,” it said.

In his victory speech on Sunday evening, Tsipras avoided reference to the bailout, but Syriza has repeatedly said it will meet its side of the deal with lenders.

Pension and labour reforms, the bank recapitalisation, debt relief and the operation of a new privatisation fund are priorities in the immediate future and the bailout accord should be swiftly implemented, the conservative Kathimerini daily said.

“Lets hope that this time the tragic mistakes of the past seven months are avoided, and the new government acts with more prudence, seeking the best possible consensus,” it said in a front-page leader comment.

But it also meant that a Syriza government could dismantle an old establishment riddled with corruption.