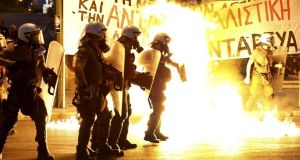 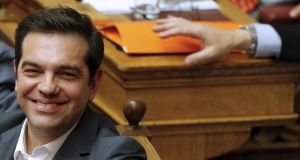 Greek Prime Minister Alexis Tsipras secured the passage of the contentious bailout legislation but lost the his parliamentary majority in the process. Photograph: Reuters

Greek MPs have voted to endorse emergency legislation transposing into law a raft of austerity measures and tax rises demanded by Greece’s creditors in order to talks to begin on a third, €86 billion bailout for the over-indebted country.

However, with almost 40 of his own MPs voting against his government or abstaining, the result means prime minister Alexis Tsipras has lost his parliamentary majority in the process, putting the long-term future of his two-party coalition in doubt.

The legislation passed with the votes from the conservative New Democracy, centrist Potami and centre left Pasok parties, some of whose leaders warned that their support could not be interpreted as a vote of confidence in the government.

After a tense debate in the 300-member parliament, 228 MPs voted with the government, while 64 voted no, including MPs from the communist KKE and neo-Nazi Golden Dawn parties.

There were also six abstentions. Mr Tsipras told MPs that his government faced an unfair battle in its first five months because it faced such huge enemies. “But out fight will bear fruit some day,” he said. “I had three options in front of me. One was to accept an agreement I disagreed with. The second was disorderly bankruptcy. And there was a third option, Schäuble plans for Grexit,” Mr Tsipras said.

As MPs began a short debate on the legislative package, peaceful anti-austerity protests turned violent when a small group of hooded individuals began throwing petrol bombs on Syntagma square, which is overlooked by the parliament building. A TV truck was torched during the disturbances while police fired tear gas and stun grenades.

In an appeal for unity within his party and government, Mr Tsipras earlier told his MPs that he had exhausted all possible avenues of negotiation and saw no real or credible alternative to the deal that they were now called to vote on.

Speaking to a closed session of his parliamentary party of 149 MPs some hours before the vote, Mr Tsipras was quoted in local media as saying “the government of the left will either move on together or fall together”.

Upping the stakes, the Greek leader also reported told his MPs that “without the support of the parliamentary group it would be difficult to remain as prime minister”.

Following that meeting, energy minister Panagiotis Lafazanis, the head of the party’s Left Platform which is leading the opposition against the deal, dismissed the idea that Syriza’s unity was at stake.

“Syriza’s cohesion is not being tested. Support for the government is a given. The government has a majority. We support the government but not the measures contained in the memorandum. This does not mean Syriza will be divided,” he said.

Before the meeting, the Left Platform published alternative proposals calling for a return to the drachma.

It said €22 billion in central bank reserves could be used as a bridging loan for the payment of wages and pensions until the new currency was introduced. While Mr Lafazanis earlier indicated that he had no intention of leaving the cabinet, it emerged that another minister had resigned her position in a letter sent or Mr Tsipras on Monday.

Alternate finance minister Nadia Valavani said she never expected the government to agree to a new memorandum and doubted it would be finalised as the “intention of the ruling circles in Germany was the total humiliation of the [Greek] government and the country”.

Comparing Greece’s situation to a war, she said the extent of the government’s “capitulation” was so “overwhelming that will not allow for a regrouping of forces”.