Hundreds of pensioners queue outside Greece's national bank in Athens on Wednesday to collect the 120 euro per week allowed by the government. The country re-opened 1,000 bank branches to cater for pensioners who do not use ATM cards. Video: Reuters 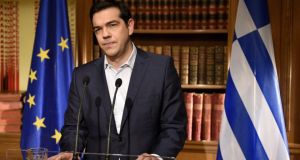 Greek Prime Minister Alexis Tsirpas delivers a televised address to the nation from his office at Maximos Mansion in Athens, Greece. Photograph: Getty 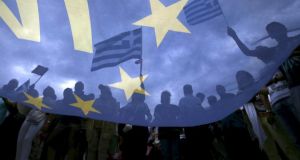 Pro-euro protestors hold Greek national flags during a pro-euro rally in front of the parliament building, in Athens, Greece, on Tuesday. Photograph: Reuters 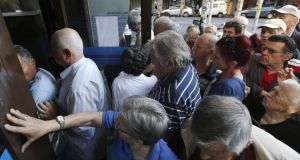 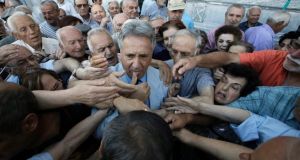 An employee of the National Bank of Greece (c) distributes priority tickets to pensioners queuing outside a bank branch in central Athens on Wednesday. Photograph: EPA 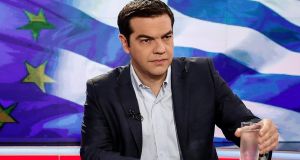 Greek Prime Minister Alexis Tsipras has vowed to push on with his plan for a referendum this Sunday on the recent proposals from the country’s creditors.

In a televised national address, Mr Tsipras also reaffirmed his support for a “no” vote in the referendum. He insisted that a “no” vote would not put Greece’s place in the euro or in the European Union at risk.

Mr Tsipras said Europe must stop acting in an “undemocratic way” and sought to reassure Greeks that their bank deposits were safe.

Meanwhile, German Chancellor Angela Merkel is sticking to her position that there can be no negotiations on a new aid package before Greece holds its referendum.

“I have set out my position and I have nothing to add to it,” she said after meeting with Italian Premier Matteo Renzi in Berlin.

Ms Merkel says her personal relationship with Greek Prime Minister Alexis Tsipras hasn’t suffered and that she backs “the right of a sovereign state” to make its own decision.

However, she added that it is equally right for other countries to have their own positions.

Earlier, Ms Merkel said there can be no new Greek deal until after the referendum, a viewpoint that contrasts that of French President Francois Hollande.

Mr Renzi said he thinks a referendum is a “mistake” but that he respects the will of the Greek people.

A conference call among euro zone finance ministers to discuss the Greek debt crisis ended on Wednesday evening. Slovakia’s finance minister Peter Kazimir said the eurogroup are united in the decision to wait for the outcome of the Greece referendum before any further talks.

Earlier it emerged that Mr Tsipras had written to international creditors saying Greece could accept a bailout offer published on June 28th if several conditions were changed.

“Come Monday, the Greek government will be at the negotiating table after the referendum, with better terms for the Greek people,” Mr Tsipras said in a Twitter message posted as he spoke on national television.

“A popular verdict is much stronger that the will of a government.”

According to The Financial Times, the two-page letter, sent to the heads of the European Commission, International Monetary Fund (IMF) and European Central Bank, elaborates on Tuesday’s surprise request for an extension of Greece’s now-expired bailout and for a new, third €29.1 billion rescue.

German finance minister Wolfgang Schäuble, said the letter came too late, had not brought any greater clarity and was no basis for serious negotiations now. Any talks on a new programme would have to start from scratch with different conditions, he told a news conference in Berlin.

However, French president Francois Hollande appeared to take a different stance, saying it was the duty of other euro zone countries, as well as Greece, to keep the country in the single currency area adding now was not the time for vetoes or “intransigent statements” but for dialogue.

“As a European I don’t want the dislocation of the euro zone, I am not into intransigent comments, into brutal rifts,”

In Greece most banks remained closed amid reports that supplies of bank notes were running low. A number of branches opened this morning specifically to allow pensioners withdraw their maximum of €120 for the week. There were crowds outside many of the branches.

Eurogroup chairman Jeroen Dijsselbloem and German chancellor Angela Merkel have said the request for a third bailout would only be considered after next Sunday’s referendum in Greece on the terms of its EU-IMF bailout terms.

The Council of Europe was reported on Wednesday as saying the conditions of the Greek referendum fell short of international standards.

Mr Tsipras’ letter reportedly says Athens will accept all the reforms of his country’s VAT system with one change: the maintenance of a special 30 per cent discount for Greek islands, many of which are in remote and difficult-to-supply regions.

With regards to pension reforms Mr Tsipras requests changes to move the retirement age to 67 by 2022 begin in October, rather than immediately.

“As you will note, our amendments are concrete and they fully respect the robustness and credibility of the design of the overall programme,” the Greek leader wrote.

Euro zone finance ministers were due to discuss the Greek request on a conference call at 3.30pm (Irish time), but the initial reaction from ministers and senior officials was the Tsipras letter contained elements that finance ministers will find hard to accept.

Although dated June 30th, it arrived after the 19 eurogroup ministers had ended a conference call on Tuesday evening and the country’s international bailout expired at midnight, when it defaulted on an IMF repayment, euro zone officials said.

“The Hellenic Republic is prepared to accept this Staff Level Agreement subject to the following amendments, additions or clarifications, as part of an extension of the expiring EFSF programme and the new ESM Loan Agreement for which a request was submitted today,” Mr Tsipras wrote in the letter, according to The Financial Times.

The Tsipras letter contained only a single sketchy reference to labour market reform, which was one of the creditors’ demands to make the Greek economy more competitive.

“The new framework will be legislated in autumn 2015,” it said without saying what measures it would contain.

Mr Schäuble also said on Wednesday it was clear if it would be possible to sort out a new bailout for Greece before Athens is due to repay €3.5 billion of bonds to the ECB on July 20th.

“I won’t make any predictions about that,” he said at a news conference to present the German budget. “We’re open to anything,” he added.

Mr Tsipras did agree to implement immediately a range of measures recommended by the Organisation for Economic Cooperation and Development to ease doing business and open up closed business sectors.

The letter made no mention of privatisations, which the Tsipras government halted on taking office and which remain a bone of contention.

Greece’s current, and second, bailout, expired at midnight Tuesday, meaning that an extension of this programme is no longer possible.

Failure to secure a breakthrough from the eurogroup ensured the country missed the €1.54 billion IMF repayment due at midnight on Tuesday.

He has also requested that a special “solidarity grant” be awarded to poorer pensioners, which he agrees to phase out by December 2019. This is more slowly than creditors’ request.

Euro zone finance ministers are to hold an emergency conference call on Wednesday to consider Greece’s request for a third bailout.

EU officials have said that any third programme would include most of the demands in the most recent bailout proposal, including controversial changes to the pensions and VAT system.

The expiration of the bailout and Greece’s failure to meet an IMF repayment on Tuesday night leaves the country without access to external funding for the first time in five years, furthering fears it is teetering on the edge of an exit from the euro area.

European shares and peripheral euro zone bonds rose on Wednesday and the euro held its own as some investors kept faith with expectations that, despite defaulting on an IMF loan, Greece will find a way to stay inside the currency zone.

Though the non-payment of the IMF loan is not likely to be technically classified as a default, it constitutes the largest experienced by the IMF since its establishment in 1945, and the first by a developed nation.

A letter from Greek finance minister Yanis Varoufakis to the chairman of the eurogroup of finance ministers of the euro zone said Greece was “fully committed to service its external debt in a manner that secures the viability of the Greek economy, growth and social cohesion.”