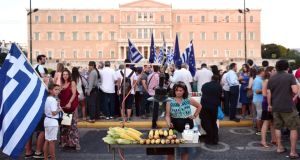 A street vendor prepares corn for sale during a pro-European Union demonstration in front of the Greek parliament in Athens. Photograph: Louisa Gouliamaki/AFP/Getty Images 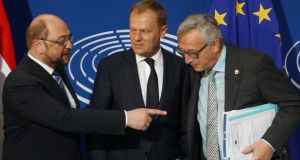 President of the parliament Martin Schultz (left), president of EU council Donald Tusk (centre) and president of the EU commission Jean-Claude Juncker at the European Parliament on Wednesday. Mr Tusk has become the latest figure to call for a proposal on debt sustainability for Greece. Photograph: AFP 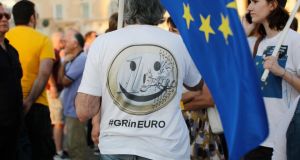 People gather for a pro-European Union rally at Syntagma Square in Athens. The government has submitted a new proposal it hopes for a bailout bid. Photograph: Simon Dawson/Bloomberg

Proposals from Greece to explain how it will meet conditions for a new international bailout loan were received on Thursday by Jeroen Dijsselbloem, who chairs the Eurogroup of euro zone finance ministers, his spokesman said.

“New Greek proposals received by Eurogroup President Dijsselbloem,” he tweeted. “Important for institutions to consider these in their assessment.”

He later added that Mr Dijsselbloem would offer no comment on the content of the proposals until an assessment of whether they formed a basis for negotiating a loan had been completed by the institutions responsible for the review.

The package of economic reforms and spending cuts, put together with help from France, was approved by a majority of Greece’s cabinet ministers. It will be presented to the Greek Parliament on Friday.

Greece’s Prime Minister Alexis Tsipras spent Thursday seeking to gain his government partners’ agreement on the reforms, which are thought to include tax rises and pension changes.

The European Commission and European Central Bank will review the proposals.

The International Monetary Fund is also involved in assessing whether Greece’s debts are sustainable. The assessment is due to be completed before the Eurogroup meets in Brussels on Saturday to consider whether to recommend launching loan negotiations.

The ministers’ conclusions will be reviewed by euro zone leaders at a summit called for Sunday afternoon.

Although the odds of a so-called Grexit have climbed, “we continue to see Greece staying in the euro as marginally more likely, not least because the majority of Greeks prefer so,” Deutsche Bank analysts wrote in a note to clients.

“Europe is intent on forcing an outcome either way.”

Earlier, Germany’s finance minister has conceded for the first time that a write-off of some of Europe’s loans to Greece might be needed to get the country’s debt to a manageable level, but in the same breath ruled out such a step.

Wolfgang Schaeuble said that European rules meant that writing off some loans to Greece was not doable, however desirable it might be for Athens’ finances.

The comments by Mr Schaeuble appeared to suggest that he does not believe Greece’s financial problems can be solved within the euro zone and could weigh on negotiations as they enter a crucial phase.

“Debt sustainability is not feasible without a haircut and I think the IMF is correct in saying that,” Mr Schaeuble told a conference in Frankfurt, before adding: “There cannot be a haircut because it would infringe the system of the European Union.”

Earlier, European Council president Donald Tusk became the latest senior figure to call for a proposal on debt sustainability to be included as part of a package for Greece.

It followed renewed calls on Thursday by the IMF for debt relief for Greece, a call echoed by US treasury secretary Jack Lew, in the strongest public intervention yet by Washington in the Greek crisis.

German chancellor Angela Merkel said on Tuesday night a debt haircut was “out of the question,” but suggested that the question of debt sustainability could be addressed at a later point.

As banks in Greece remained closed until Monday, with a daily €60withdrawl limit, the European Central Bank tightened the screws further on the Greek banking sector on Wednesday, after the Governing Council refused to increase the amount of emergency liquidity it is providing to Greek banks.

Instead it maintained the cap on emergency liquidity assistance (ela) for Greece at just under €89 billion.

Greek banks will now remain closed through the weekend, pending the outcome of this weekend’s talks, with the ECB due to reassess its provision of ela next Monday.

Earlier ECB Mario Draghi has voiced unprecedented doubts about the chances of rescuing Greece from bankruptcy.

Italian daily Il Sole 24 Ore quoted the ECB chief, under growing fire in Germany for keeping Greek banks afloat, as saying he was not sure a solution would be found for Greece and he did not believe Russia would come to Athens’ rescue.

Asked if a deal to save Greece could be wrapped up, Mr Draghi told the paper as he was boarding a plane in Brussels on Wednesday: “I don’t know, this time it’s really difficult.”

1 Coronavirus: Surge in cases still expected to hit hospitals in coming days and weeks
2 ‘Everyone still thinks it’s a joke’ - parents of toddler with coronavirus speak out
3 Coronavirus: Trump’s tone changes as US faces brutal loss of life
4 Coronavirus: Westmeath has highest rate of Covid-19 outside of Dublin
5 Coronavirus: Should everybody be wearing masks to combat Covid-19?
Real news has value SUBSCRIBE