A year after coming to power, the Greeks’ first left-wing government is in a lose-lose game 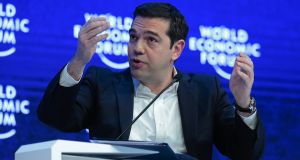 It was (to paraphrase Dickens) the best of years, it was the worst of years. On January 25th last year Greeks elected their first ever left-wing (as distinct from socialist) government. This, Syriza, led by Alexis Tsipras, was both A Good Thing and Not Quite Such A Good Thing.

Dickens continues the opening of A Tale of Two Cities by pairing wisdom/ foolishness, belief/ incredulity, light/darkness and hope/ despair. In the past year Greeks have had all of these in excess. The jubilation at the (apparent) rejection of the bailout in the July referendum, followed by the realisation that nothing, but nothing, had changed, underlined how fragile and fickle the democratic process can be.

Greeks began to think that they might establish a real presence on the world stage, by means of ideological persuasion, but they also discovered that it came at a price – humiliating rejection. From a win-win position one year ago, Tsipras and Syriza are now in a lose-lose game.

And the past year has emphasised that there are two Greeces. Not the us-and- them, have-and-have not division, but the underlying causes that are, apparently, indelible. On one side the cancerous corruption favouring the oligarchs and plutocrats, and on the other what Myles na gCopaleen would have called “the Plain People of Greece” who just want to get on with their lives.

The corrupt state is the result of decades of Plain People innocently, blindly and stupidly trusting politicians, and one year of well-meaning but naive policies cannot undo that corruption. Former finance minister Yanis Varoufakis said (in Kilkenny, interviewed by RTÉ’s Miriam O’Callaghan): “The oligarchs were completely untouched by the troika”. And he said Syriza’s surrender to the troika “makes them absolutely incapable of effecting change”.

In order to introduce reforms, Tsipras has to replace those whose interest is best served by retaining the current system. If he does so, he is accused of cronyism, bringing in trusties to get the job done. If he doesn’t, the corrupt system will continue and the EU reforms will not happen. So, lose- lose.

The past year has been wake-up time for everyone. The international financial community is waking up to the fact that for so long it denied that the Greek debt could be restructured; it’s now admitting that the austerity programme was a textbook remedy for an as yet undiagnosed problem which they didn’t understand.

Greeks would have watched the RTÉ programme and said “So what? What’s new? What’s there to shout about?” Clientelism and bribery are so endemic that these blips would never have got air time in Greece, not least because most media are controlled by the plutocrats.

As journalist Nick Malkoutzis says, Greeks are “torn between love for their country and hate for what it has become”. Throughout my book Greece Through Irish Eyes I emphasised the need to both love and mourn Greece: to recognise that within everything lovable there is also something to mourn, and vice versa. I mourn the events and circumstances that created the past year of triumphs and defeats.

But I love what I see in the village where I live: the way parents cherish their children and want to give them the best chance in life. I love the sight of truckloads of olives going to the oilery at the end of the village street; the way I can barter fruit for eggs with my neighbour. And I love it that a retired telephone engineer will fix my phone when it’s struck by lightning, and refuse any payment, saying, “Give me a copy of your book instead. It’ll be valuable when you’re dead.”

1 Coronavirus: Warning of similar measures for other counties as Donegal moves to Level 3
2 Aer Lingus staff say they are living in ‘near poverty’ and unable to cover rent
3 Séamus Woulfe: The last man standing in Golfgate is set to learn his fate
4 Australian man found guilty of murdering Irishwoman Ciara Glennon in 1997
5 Covid-19 Q&A: How are we doing, is there any good news and what happens now?
Real news has value SUBSCRIBE