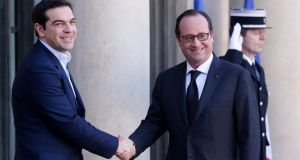 Greece’s new leftist government appealed to the European Central Bank on Wednesday to keep its banks afloat and vowed to respect European Union rules as it seeks a negotiated solution with euro zone partners to reduce its debt burden.

Finance Minister Yanis Varoufakis said after meeting ECB President Mario Draghi in Frankfurt he believed Athens could count on central bank support during the short period it would take to conclude talks with international lenders.

Banking sources told Reuters that two Greek banks have begun to receive emergency liquidity assistance from the Bank of Greece after an outflow of deposits accelerated after the victory of the hard left Syriza party in a general election on January 25th.

The Greek government wants that funding to continue because if the ECB were to halt it, Greek banks could collapse, forcing the country out of the euro zone.

Promising to end five years of austerity, prime minister Alexis Tsipras and Varoufakis are meeting senior officials across Europe to seek support for a new agreement on Greece’s debt.

Their reception has been cautious so far, even in euro zone countries such as France and Italy which Athens had hoped would support its case for debt relief.

European Council president Donald Tusk said after meeting Mr Tsipras in Brussels that any solution must be acceptable to all member states, a veiled reference to Germany, Greece’s biggest creditor which takes the hardest line on fiscal discipline.

“Those negotiations ... will be difficult, will require cooperation and dialogue as well as determined efforts by Greece, ” Mr Tusk said.

Mr Tsipras (40) said after talks with European Commission President Jean-Claude Juncker that Greece respected European Union rules and would find a solution to its economic problems within the framework of EU law.

There was no agreement yet, but talks were going in the right direction, he said.

After meeting Mr Draghi in Frankfurt, Mr Varoufakis told Reuters: “The ECB is the central bank of Greece ... The ECB will do whatever it takes to support the member states in the euro zone.”

“I have no doubt that we can conclude our discussions with our European partners, as well as with the IMF and the ECB, in a very short space of time so that we can kick-start the Greek economy,” he added.

Without the support of its creditors and the ECB, Greece would soon find itself back in an acute financial crisis. Unable to tap the markets because of sky-high borrowing costs, the government has enough cash to meet its funding needs for the next couple of months. But it faces around €10 billion of debt repayments over the summer.

The ECB made no comment on the talks. Its policy-making Governing Council was due to meet later on Wednesday to discuss whether to extend emergency funding for Greek banks, on what conditions and for how long.

“We outlined to him the main objectives of this government which is to reform Greece in a way that has never been tried before and with a determination that was always absent,” Mr Varoufakis said after his session with Mr Draghi.

“We also stated categorically that the debt-deflationary cycle in which Greece finds itself is detrimental to all efforts to reform Greece. He was good enough to explain to us his own constraints.”

Sources familiar with ECB thinking said Athens needs to be in a bailout programme or actively negotiating a new one to qualify for emergency funding.

With the Greek public determined to cast off the stigma of supervision by a troika of EU, IMF and ECB inspectors, and to regain economic sovereignty, the semantics of any new arrangement may be crucial.

A source familiar with the Greek position said after the talks with Draghi: “We are thinking of a bridging programme. You may not call it a ‘programme’ for political reasons but perhaps a contract.”

ECB officials in the meeting talked about the rules on emergency funding and their desire that the Greeks reach an interim arrangement with the Eurogroup of euro zone finance ministers, which next meets on February 16th, the source said.

Mr Varoufakis has so far said Greece will not extend the bailout programme when it expires on February 28th. A government source disclosed that the finance minister had a previously unannounced meeting with IMF officials last weekend.

In a hectic first week that rattled financial markets, ministers scrapped some privatisation plans and said they would reverse public sector job cuts and raise the minimum wage.

However, Mr Varoufakis has since struck a softer tone, saying Greece aims to swap its official loans for growth-indexed bonds and swap its ECB loans for perpetual interest-yielding bonds with no repayment date.

Euro zone officials have responded coolly, noting that the ideas amount to a partial write-off by other means.

“I’m very optimistic that we will try to do our best in order to find a common, viable and mutually acceptable solution for our common future,” Mr Tsipras said.