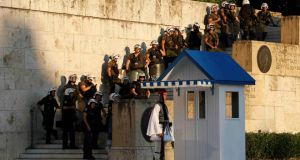 Greek riot police stand guard on the steps in front of the Parliament building, behind a presidential guard, during an anti-austerity demonstration in Athens on Sunday. Photograph: Yannis Behrakis/Reuters

Senior figures in Greece’s ruling Syriza party have accused Germany and other creditors of trying to humiliate Athens by seeking “punitive” reforms.

Prime minister Alexis Tsipras faces a battle to contain a rebellion in his own party after 17 Syriza MPs either voted No or abstained when the Greek parliament voted to authorise the government to negotiate a new bailout.

The vote passed thanks to support from the opposition benches, but without his majority Mr Tsipras could face major problems in getting individual austerity measures through parliament. Syriza is at risk of splitting over Mr Tsipras’s proposed package of tax increases and spending cuts, which is similar to a creditors’ document overwhelmingly rejected by Greek voters in a referendum earlier this month.

“What is at play here is an attempt to humiliate Greece and Greeks, or to overthrow the Tsipras government,” Dimitrios Papadimoulis, a Syriza MEP, told Greek television.

The government’s priority was for a deal with creditors, and it would handle everything else “in due course”, Mr Tsipras said on Saturday. This was echoed yesterday by an editorial in the Syriza newspaper, Avgi, which urged Mr Tsipras to agree a deal. But the paper noted that the rebellion was pushing Greece closer to an election “in the short term”.

Syriza heavyweights, including parliament speaker Zoi Konstantopoulou and energy minister Panagiotis Lafazanis, who leads the party’s Left Platform faction, were among 17 of his 149 MPs who either voted No, abstained or were absent when the parliament approved Mr Tsipras’s proposals in the early hours of Saturday.

Another 15 indicated they would rebel if specific measures were put before them.

As the weekend progressed, Tsipras allies speculated a cabinet reshuffle may follow. “There are some that essentially turned their backs on Alexis Tsipras,” Terens Quick, a deputy minister of state from the junior coalition partner, Independent Greeks, told Greek television. “If I were proudly to proclaim ‘I don’t agree and I’m abstaining,’ I’d also resign the next moment.”

Greek banks have been closed for two weeks and daily ATM withdrawals are limited to €60 under capital controls imposed by the government. The controls have staunched the flow of cash into the economy, badly hitting businesses and trade.

The banks are due to remain closed at least until tomorrow. Mr Stathakis said they could reopen quickly in the event of a deal on a new bailout being agreed, but said the capital controls would remain in place for at least another two months.