Germanwings crash is first of a European airliner since 2009

Analysis: Crash likely to have little in common with downing of Air France 447

Aerial footage released by the French interior ministry shows scattered debris at the crash site of the Germanwings Airbus A320 which went down in the French Alps. Video: Reuters

A flight tracker shows the flight path and sudden descent of the German Wings plane that crashed in the French Alps en route from Barcelona to Dusseldorf. Video: flightradar24.com 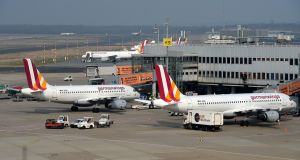 Dusseldorf International Airport, where some family members of people believed to have died in the crash began to gather on Tuesday. Photograph: Sascha Steinbach/Getty Images

Tuesday’s tragic loss of a Germanwings Airbus A320 is the first crash of a European airliner since June 2009, when Air France Flight 447 crashed into the Atlantic en route to Paris from Rio de Janeiro killing all 228 on board.

Inevitably comparisons have been made between the two crashes, not least because the aircraft in each case was built by Airbus. But similarities probably end there because it is likely the crashes have little in common.

When the black boxes were found 18 months after the Air France disaster, it emerged the pilots were conscious until the very end.

This was not clear at the time because the aircraft was in mid-Atlantic and out of air traffic control radio range at the time of the crash.

The doomed Germanwings flight was flying well within radio range of several air traffic control centres but no Mayday transmissions were received.

French controllers grew concerned as they watched the aircraft descend on radar without permission from its scheduled altitude of 38,000ft. They made several attempts to contact it without receiving a reply.

Neither did the pilots alert controllers by broadcasting or ‘squawking’ the 7700 emergency code which shows up on the data block on the air traffic radar screens. This alerts controllers to the fact an aircraft is experiencing difficulties but is unable to communicate for one reason or another.

It crashed into the Alps shortly after.

The lack of any radio transmissions is leading some commentators to the conclusion that the Germanwings pilots were possibly unconscious at the time of the accident. If this is true, there may have been several reasons.

Terrorism is always suspected in cases like this. A bomb explosion, or other terrorist act, could have rendered the pilots unconscious. An armed hijacker could also prevent pilots from using their radio. The White House appears to have ruled out terrorism.

Fire cannot be ruled out and, while they have very efficient oxygen masks, pilots may have delayed wearing them and could have been overcome by toxic smoke.

A far more likely explanation, however, is that the aircraft suffered a sudden or explosive decompression shortly after it reached its cruising altitude of 38,000 ft. This happens when the difference between the compressed air inside the fuselage, and the thin unbreathable air outside, is at its greatest. Any weak spots on the fuselage resulting from metal fatigue or even corrosion can fail due to the large pressure differential.

The otherwise well-maintained Germanwings plane was 24 years old, an age when any such weaknesses are more likely to manifest themselves.

Air escapes rapidly from the fuselage and is replaced by outside air which, at that height, contains very little oxygen.

When decompression occurs at high altitudes, passengers and pilots have less than 30 seconds of useful consciousness left and rapidly become extremely confused and ineffective before losing consciousness.

Unless they don oxygen masks immediately, the pilots soon develop a condition known as hypoxia, or brain oxygen starvation. A period of unconsciousness is soon followed by death.

The most dramatic example of explosive decompression was the 1988 incident caused by corrosion and metal fatigue aboard an Aloha 737 flying over Hawaii when a large section of roof suddenly peeled off.

More recently, US low-cost carrier Southwest suffered two similar decompressions in 2009 and 2011 due to the failure of smaller areas of metal on older aircraft models.

The Southwest aircraft and the Aloha planes reached the ground safely but all died aboard Helios Airways Flight 522 when it crashed into a Greek mountain in 2005 after the pilots succumbed to hypoxia.

Sudden, or explosive decompression, is rare but still occurs, although most aircraft successfully recover from it. Pilots are trained to immediately descend to a lower altitude – usually 10,000 feet — where the air is thicker and contains more oxygen and when they (and their passengers) can breath safely without oxygen masks.

This might explain the Germanwings aircraft’s initial loss of altitude after spending just a minute at cruising altitude. Did the pilots deliberately lose altitude to reach a safe, breathable altitude before succumbing to hypoxia, which rendered them incapable of halting the aircraft’s perilous descent?

Only a careful analysis of the wreckage, and especially the black boxes, will tell for sure. The flight data recorder monitors cabin pressure and will reveal any sudden changes. The cockpit voice recorder may have recorded the sound of any failure of the aircraft’s skin but investigators will especially listen to the pilots’ speaking voices towards the end of the cockpit voice tape.

A slower rate of speech, long delays in answering questions and slurred words are tell-tale signs of hypoxia.