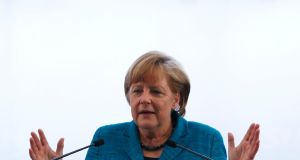 Germans lamented their unexpectedly poor showing at the Eurovision Song Contest, blaming chancellor Angela Merkel’s tough stance in the euro zone crisis for their failure to win any points from 34 of the 39 countries voting.

Denmark’s Emmelie de Forest won the event, watched by around 125 million people across Europe, with 281 points while German act Cascada was 21st out of 26 countries, getting just 18 points from Austria, Israel, Spain, Albania and Switzerland.

“But we all have to be aware that it wasn’t just Cascada up there on stage (being judged) but all of Germany. ”

Dr Merkel is popular in Germany for her firm position during the euro zone crisis. But she is loathed in parts of Europe for her insisting on painful austerity measures in countries such as Greece, Spain and Italy in exchange for rescue packages.

“It’s unexplainable,” said ARD expert commentator Peter Urban on Sunday after Cascada singer Natalie Horler was 21st even though German media had touted her as a favourite.

More than eight million Germans watched, a 44 per cent market share. “Is it that people just don’t like us?” Urban was asked on ZDF TV.

“There’s some truth to that,” he said. “There will be two German soccer teams in the Champions League final next week and maybe people didn’t want Germany to win Eurovision too.”

It’s unclear if being one of the biggest importers of German-backed austerity figured in Ireland’s last place finish.

Singer Ryan Dolan said yesterday that this result was “a big shock” for the Irish delegation. “We really can’t understand it. The track is charting in 17 countries. If people are buying the song and liking the song, I don’t see how this works that we ended last.”