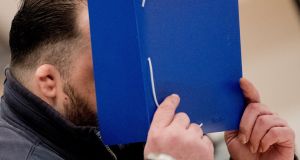 Former nurse Niels Hoegel covers his face as he arrives for the start of his trial in a courtroom in Oldenburg, Germany on Tuesday. Photograph: Julian Stratenschulte/Pool via Reuters

A former nurse accused of killing 100 patients at two hospitals in Germany more than a decade ago has told a court as his trial opened that the charges against him are largely accurate.

Niels Hoegel (41) is already serving a life sentence for murder. His trial in the north-western city of Oldenburg began with a minute’s silence for the patients.

Asked by presiding judge Sebastian Buehrmann whether the charges against him are largely true, Hoegel replied yes, adding: “All that I have admitted to is true.” There are no formal pleas in the German legal system.

Hoegel hid his face behind a blue plastic folder as he was ushered into the courtroom by police and his lawyer.

The murder charges stem from Hoegel’s time at a hospital in Oldenburg between 1999 and 2002 and at another hospital in nearby Delmenhorst from 2003 to 2005. The alleged victims were aged between 34 and 96.

Hoegel was convicted in 2015 of two murders and two attempted murders. He said then that he intentionally brought about cardiac crises in some 90 patients in Delmenhorst because he enjoyed the feeling of being able to resuscitate them.

The Oldenburg state court is conducting the trial at a courtroom set up in a conference centre, a venue chosen to accommodate a large number of co-plaintiffs and public interest in the proceedings.

Judge Buehrmann said: “We will make every effort to seek the truth.” He promised Hoegel a fair trial.

Hoegel told the court that he had a “protected” childhood, free of violence. He said his grandmother and his father, who were both nurses, had been his role models for going into the profession.

An additional conviction could affect Hoegel’s possibility of parole, but there are no consecutive sentences in Germany. In general, people serving life sentences are considered for parole after 15 years.

“We want him to get the sentence that he deserves,” said Frank Brinkers, whose father died in an overdose allegedly administered by Hoegel. “When this trial is over we want to put this whole thing behind us and find closure.”

The trial is scheduled to last until May.

Ten years ago, a German nurse was convicted of killing 28 elderly patients. He said he gave them lethal injections because he felt sorry for them. He was sentenced to life in prison. In Britain, Dr Harold Shipman was believed to have killed as many as 250 people, most of them elderly and middle-aged women who were his patients. Known as Dr Death, Shipman was sentenced to 15 life terms in 2000; he died prison in 2004, apparently by suicide. – AP/Reuters