German leadership is indispensable for a properly functioning Europe 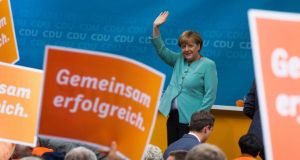 Successful together, the posters read, but Germany has some problems as well as its many successes. Photograph: Reuters

A year out from any US presidential election, there is much chatter on this side of the Atlantic about even the most obscure detail of the political parties’ primary votes in Iowa and New Hampshire. It is curious that, just three weeks from a far more consequential election for Ireland and the rest of Europe, there has been only a fraction of the interest in the campaign in Germany.

The race is now entering the home straight, and Angela Merkel is almost certain to win a third term as chancellor. But her coalition partners are very likely to change, if opinion polls over many months are anything to go by.

Questions arising from a new coalition dynamic in Berlin will merely add to the uncertainties about how Germany seeks to address the huge range of issues on Europe’s agenda in the short and medium term. How these challenges are addressed will affect the lives of every citizen in Europe.

The issues include: new and/or extended bailouts; credit lines and debt write-downs for struggling euro area members; questions around corporation tax rates, specifically Ireland’s rate and more widely in an EU context what, if any, harmonisation mechanism can be agreed; the future use of the European Stability Mechanism to recapitalise euro zone banks; the role of the European Central Bank in pursuing unorthodox policies; the pace of budgetary consolidation; and the rebuilding of the foundations of the euro, including, most immediately, the creation of a banking union.

These are some of the foreseeable issues on the agenda during Merkel’s third (and final) term. She and her coalition partners will be the most important people in deciding how they are addressed. If anything, the next Merkel-led administration will see its relative power grow in deciding (or deciding not to decide) matters in Europe. One reason for this is the weakness of other EU powers.

France on the back foot
France’s economic fragility and its incapacity for reform have left it on the back foot. This, and Germany’s unwillingness to continue playing the submissive partner in the Franco-German relationship, mean that the bilateral relationship that has been the most important in driving European integration has fundamentally changed.

With Italy’s public debt having recently risen above 130 per cent of GDP and recession ongoing, it faces having to go cap-in-hand to Frankfurt for assistance. Rome now exercises less influence than ever in setting Europe’s agenda.

With Britain outside the euro zone and increasingly detached from Europe as the probability increases that it will exit the EU altogether, its voice in Brussels and in national capitals has never been listened to less on matters of continental importance.

But it is not only the relative weakness of others that has changed the power dynamics in Europe. Germany has many fundamental strengths. It also has fewer weaknesses than Europe’s other big economies.

As the EU’s most populous state, sheer numbers in part explain why Germany’s is by far the biggest economy in Europe, alone making up one quarter of the 17-member euro area.

Innovation
German exports as a percentage of GDP are multiples of any other large economy, and the innovation intensity of its industrial base means that its companies face less competition from low-wage emerging economies. Moreover, high productivity and the painful reforms introduced by Merkel’s predecessor have placed the entire economy on a highly competitive footing.

A “non-weakness” is low levels of household debt. Unlike their counterparts in most of the rest of the developed world, Germans did not go on a borrowing binge in the years leading up to the financial crisis in 2008. As a result, the growth-dampening paying down of debt that is taking place in Ireland and elsewhere is not happening in Germany.

But no country is without weaknesses. Germany has awful demographics, its east-west divide remains wide almost a quarter of a century after reunification and its public debt stands at more than 80 per cent of GDP.

Perhaps its greatest weakness is its financial system. Among other things, German banks bought lots of dodgy financial securities during the bubble years. Many of these have been “warehoused” in the hope they will eventually be worth something. Whether or not this can-kicking approach proves successful, it typifies Merkel’s minimalist approach to addressing problems at home and in Europe. In times of crisis, such minimalism can be sustained for only so long.

Fortunately, the other parties likely to form a coalition are indicating more proactive stances. While many in Europe fear a dominant Germany, its leadership has become indispensable. Merkel has not shown that leadership. It is to be hoped that her new coalition partners stiffen her spine and make her bolder in getting to grips with the continent’s many challenges.