German tax semantics shift away from ‘sinner’ to ‘cheat’ 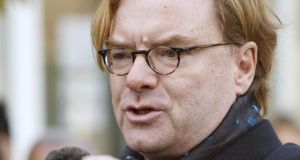 Berlin’s culture minister André Schmitz has resigned after eight years in office when it emerged the German tax man had linked him to a Credit Suisse bank account holding €425,000. Photograph: Sebastian Kahnert/AFP/Getty Images

Schmitz resigned after eight years in office on Tuesday when it emerged the German tax man had linked him to a Credit Suisse bank account holding €425,000. The 56- year-old admitted setting up the account for part of his inheritance after he was adopted as an adult by the heiress to the Wella haircare fortune. He was forced to pay almost €20,000 in back taxes and a €5,000 fine.

“It’s an unforgivable mistake that I regret deeply,” said Schmitz.

He told his boss, Berlin mayor Klaus Wowereit, of the affair in 2012. He decided to keep Schmitz in his job – and keep the affair to himself – a decision that has come back to haunt him. For the first time since becoming mayor in 2001, Wowereit is under fire from Social Democrat (SPD) comrades, worried the affair will damage its credibility on tax fraud.

SPD leader Sigmar Gabriel said he will not tolerate tax cheats. “Tax evasion is no trivial offence,” he warned. “We in the SPD have to be role models.”

Schmitz is one of an estimated 250 Germans with undeclared accounts uncovered in a 2012 raid on Credit Suisse.

On Sunday, Alice Schwarzer, feted for decades in left-wing and feminist circles as a moral instance, conceded she had set up an account in Switzerland in the 1980s. Her admission followed revelations in Der Spiegel that, after Germany began a crackdown on Swiss banks, she approached the tax authorities and paid €200,000 in back taxes.

Schwarzer has mixed her remorse with anger, accusing Der Spiegel of breaching her right to tax confidentiality.

“Yes I made a mistake, I was careless, but I have put right the mistake,” she wrote on her website. “The taxes are paid and, in the eyes of the tax authorities, the case is closed. What justification, then, is there for this denunciation?”

In response, Der Spiegel has thrown back in her face her decades-old campaigning slogan on reproductive rights and gender issues: “The private is public.”

The SPD, anxious not to be caught on the back foot, has vowed to review German tax laws that allow evaders escape charges by making retroactive declarations with the fiscal authorities.

Their opposition to this principle saw them block a bilateral tax deal agreed last year between Germany and Switzerland that would have allowed anonymous one-off payments on undeclared income.

Now the SPD has promised to launch a fresh campaign, both against tax havens and tax cheats.

Before that happens, many Germans think the time has come to change the term at the heart of the tax debate. For decades, Germany has shown a remarkably Catholic approach to what it calls Steuersünder, or tax sinners. The avalanche of revelations suggests, however, the land of Martin Luther is having a change of heart. The era of the Steuerbetrüger – the tax cheat – has begun.