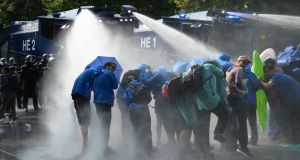 Police use water canon while demonstrators block a street during protests against the G-20 summit in Hamburg on Friday. Photograph: AP 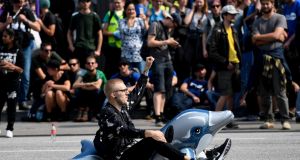 A man on an inflatable dolphin makes a gesture during a demonstration on the opening day of the G20 summit in Hamburg. Photograph: EPA 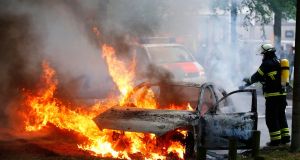 A firefighter works at the scene where a number of cars were set on fire during the G20 summit in Hamburg. Photograph: Reuters 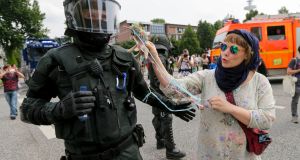 A demonstrator holds a stuffed unicorn toy close to a riot police officer’s face during a rally outside Schlump station. Photograph: EPA 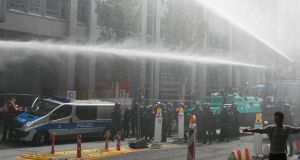 Police fire water cannons at demonstrators on the opening day of the G20 summit in Hamburg. Photograph: EPA

German police have sent reinforcements to Hamburg as the G20 host city braced itself for a second night of violence.

Throughout the day, black-clad masked activists threw stones, fireworks and bottles at police in lengthy clashes.

However most of the sporadic violence was far away from the security zone around the Hamburg’s trade fair.

In the working Altona district, seven kilometres from the trade fair, shop windows were smashed while, along the Elbschausse road leading to the wealthy enclave of Blankenese, around two dozen cars were set alight.

In total, 160 police and dozens of protestors were injured in the first 24 hours of the Hamburg summit. Other protests passed off peacefully on Friday, including one in the city’s harbour.

While the partners’ programme was reconfigured accordingly, US secretary of state Rex Tillerson was held up by an estimated 500 masked demonstrators. Delays and blockades saw German finance minister Wolfgang Schäuble abandon plans to attend an outreach event with school children.

It was a tale of three cities in Hamburg on Friday: beyond the immediate security zone around Hamburg’s trade fair, and isolated pockets of violence, life was quieter but relatively normal in the rest of Hamburg.

While many Hamburg locals fled the city ahead of the summit, those who remained said felt their famed equanimity being tested by security measures and protestors.

“For a week we’ve heard helicopters above all the time, the buses don’t run, people leave their cars at home and walk or cycle,” said resident Benjamin Laub.

Hamburg police conceded on Friday they lost control of the situation the evening before, when they fired water cannon, used pepper spray and baton-charged the crowd.

“We tried to separate the peaceful from violent demonstrators and that didn’t succeed,” said Timo Zill, Hamburg police spokesman, who took refuge in an ambulance after being attacked by protestors. “There was an explosion of violence, the likes of which we’ve never seen and had no option but to react.”

Organisers of anti-G20 events accused security of taking excessive risks to defend the summit, risking casualties by using water cannon against protestors in precarious spots, such as rooftops and bridges.

“The police should have reacted proportionately, it wasn’t necessary and a lot of people are injured,” said Andreas Belchschmidt, one of the anti-G20 demonstration organisers.

As leaders arrived at the G20 venue on Friday, environmental group Greenpeace launched a balloon at the adjacent television tower emblazoned with the logo “Planet Earth First”.

“This summit, with all its costs, blockades and inconveniences, can only be justified when it agrees concrete measures to protect our planet,” said Anike Peters of Greenpeace Germany.