‘At least 28 killed’ in fight at Mexican prison 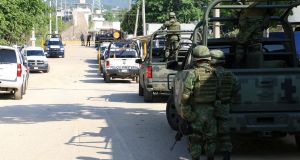 Soldiers stand outside a prison after a riot broke out at the maximum security wing in Acapulco, Mexico. Photograph: Troy Merida/Reuters

At least 28 inmates died in a fight between prisoners early on Thursday morning at a Mexican prison in the southwestern city of Acapulco, state security official Roberto Alvarez told reporters.

Three more people were wounded in the fray, he said. Acapulco is the biggest city in Guerrero, one of Mexico’s most lawless states and a centre of opium poppy production that has been a major concern to US officials.