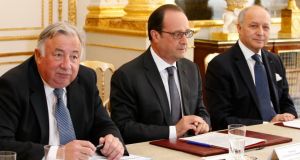 The latest revelations of espionage among Western allies come after it emerged the US National Security Agency (NSA) had spied on Germany and that Germany‘s own BND intelligence agency had cooperated with the NSA to spy on officials and companies elsewhere in Europe.

Mr Hollande held an emergency meeting of his ministers and army commanders after revelations the NSA had spied on the last three French presidents.

Government spokesman Stephane Le Foll said a senior French intelligence official would be dispatched to the United States to confirm the spying is over.

“France will not tolerate actions that threaten its security and the protection of its interests,“ a statement from the president‘s office said, adding it was not the first time that allegations of US spying on French interests had surfaced.

“Commitments were made by the US authorities. They need to be recalled and strictly respected.”

The French foreign ministry summoned the US ambassador. After meeting Mr Hollande, politicians told reporters the French leader had informed them he would speak with president Barack Obama later in the day.

A statement from the US National Security Council said it was not targeting and would not target Mr Hollande‘s communications but did not say whether spying had taken place in the past.

“We have to verify this spying has finished,“ Mr Le Foll told reporters, adding that ministers were told to be careful when speaking on their mobile phones.

“Between allies this is unacceptable and incomprehensible. France does not spy on its allies.“

While Paris and Washington have good ties in general, UN Security Council veto-holder France fiercely maintains its independence on foreign policy and over the last two years there have been moments of friction and irritation on both sides.

Mr Hollande was disappointed by Mr Obama‘s last-minute decision not to strike Syrian government positions in 2013. US officials have frequently, in private, lambasted France‘s tough stance in talks over Iran‘s nuclear programme.

The revelations were first reported by French daily Liberation and on news website Mediapart, which said the NSA spied on presidents Jacques Chirac, Nicolas Sarkozy and Francois Hollande during the period of at least 2006 until May 2012.

According to the documents, Mr Sarkozy considered restarting Israeli-Palestinian peace talks without US involvement and Mr Hollande feared a Greek euro zone exit back in 2012.

Mr Le Foll said Paris had not decided whether to launch legal proceedings as Germany had done but, amid calls from some quarters for retaliation, played down diplomatic consequences.

“In the face of threats that we face and given the historic ties linking us, we have to keep a perspective,“ he said. “We‘re not going to break diplomatic ties.“

Claude Gueant, Mr Sarkozy‘s former chief of staff and one of the reported targets of the NSA, told RTL radio: “I feel like trust has been broken.“

The documents included summaries of conversations between French officials on the global financial crisis, the future of the European Union, ties between Mr Hollande‘s administration and German chancellor Angela Merkel‘s government.

The documents also contained cell phone numbers of officials in the Elysee presidential palace, including the cell phone of the president, WikiLeaks said.

Ironically, the French parliament will adopt on Wednesday an intelligence bill to enhance counter-terrorism activities. It waives the need for judicial warrants to deploy phone taps, hidden microphones, cameras and other devices.

1 Coronavirus: Almost 100 staff and residents in one nursing home test positive, Dáil hears
2 Coronavirus: Surge in cases still expected to hit hospitals in coming days and weeks
3 ‘It’s Sinn Féin against the rest’: NI Executive in conflict over coronavirus
4 ‘Everyone still thinks it’s a joke’ - parents of toddler with coronavirus speak out
5 Tributes to ‘stalwart’ of London-Irish community who died from coronavirus
Real news has value SUBSCRIBE