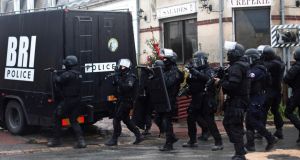 Riot officers patrol in Longpont, north of Paris. The suspects were were identified by a petrol station attendant in the town of Villers-Cotterets, 70km northeast of the French capital. Photograph: Thibault Camus/AP

All France became Charlie Hebdo on Thursday. As one commentator put it, the extremists who attacked the satirical magazine on Wednesday murdered 12 people and wounded 66 million others.

At noon, the trains halted, classrooms went quiet. In every public building and on squares across the country, people froze in silent homage to the dead. When the silence ended, many burst spontaneously into the Marseillaise.

The bells of Notre Dame cathedral tolled for 10 minutes, while hundreds stood in pelting rain. Many wept, held hands or raised pencils in solidarity with the assassinated journalists. Several said they found solace in this coming together.

At the same time, police closed in on two brothers suspected of the killings. Chérif and Said Kouachi, aged 32 and 34, left identity papers in the getaway car they abandoned.

They were identified by a petrol station attendant in the town of Villers-Cotterets, 70km northeast of Paris, as the men who stole the till, petrol and food at gunpoint in the morning. The wanted poster circulated by police notes they are “armed and dangerous”.

“Nothing can divide us. Nothing should separate us,” President François Hollande said at Paris police headquarters, where he paid homage to the two policemen killed on Wednesday. The point-blank shooting of wounded policeman Ahmed Merabet seemed to symbolise the killing of their co-religionists by extremist jihadis.

Paris was as tense as it was mournful. A policewoman was shot dead at the scene of a traffic accident in the suburb of Montrouge on Thursday morning. A man wearing a bulletproof vest and armed with a handgun and rifle stopped, got out of his car and fired at her. Authorities believe the killing was not related to Wednesday’s massacre.

The Gare du Nord was evacuated because of a suspicious package. At least three mosques have been vandalised and the windows of a kebab shop blown out since the killings.

By nightfall, 88,000 police and soldiers had been deployed throughout France, 9,650 of them in the Paris region, interior minister Bernard Cazeneuve said. They patrolled airports, train stations, schools and newspaper offices, while armed officers guarded the main gateways to the city.

Grieving members of the public, including Hassen Chalghoumi, the imam of Drancy, who has condemned the attacks, laid flowers on a makeshift altar outside Charlie Hebdo’s offices. Patrice Pellou, a columnist for the magazine, sobbed as he announced that one million copies would be printed next week, compared with the normal print run of 60,000. Libération newspaper offered office space to the surviving journalists.

Mr Hollande is receiving the leaders of all French political parties, including the former president Nicolas Sarkozy. However, Marine Le Pen, leader of the anti-immigrant and Islamophobic National Front, complained that her party had not yet been invited to join the solidarity march scheduled to take place on Sunday.