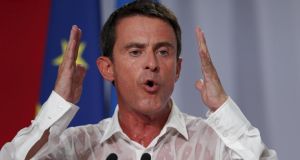 French prime minister Manuel Valls: “Migrants must be treated with dignity, lodged and cared for. Our duty is to find long-term solutions”. Photograph: Stephane Mahe/Reuters

Prime minister Manuel Valls made the most fervent official French plea to date on behalf of migrants who are “fleeing war, persecution, torture and oppression” in his closing address to the socialist party summer school on Sunday.

France has until now played a subdued part in Europe’s migrant crisis, but Mr Valls’s speech and his day-long visit to Calais on Monday, in the company of interior minister Bernard Cazeneuve and two EU commissioners, could signal a more assertive stance.

Mr Valls said every request for asylum “must be examined quickly. Migrants must be treated with dignity, lodged and cared for. Our duty is to find long-term solutions”.

Close to 31,000 people have died while attempting to reach Europe since 2000, according to the European journalists’ project “The Migrant Files”, cited by Le Monde.

“Give me your tired, your poor,/ Your huddled masses yearning to breathe free,/ The wretched refuse of your teeming shore,” Mr Valls said, quoting Emma Lazarus’s poem, which is engraved in bronze on the Statue of Liberty:

The prime minister’s visit to Calais is presented as a fact-finding mission and an attempt to reassure the local population, unsettled by the constant, uncontrolled flow of people trying to reach England through the Channel Tunnel.

At the Jules Ferry Centre, which was established earlier this year on the site of a former dump to draw migrants outside the town, Mr Valls will visit a dormitory where women and children sleep 15 to a room. The dormitory is meant to diminish the number of sexual assaults on migrant women. There have been violent incidents between the various communities – Syrians, Africans, migrants from the Balkans – encamped in what is known as the “new jungle” around the centre.

Mr Valls will also meet Vie Active, Secours Catholique and Caritas, three of the non-governmental organisations who receive subsidies from Paris and the EU to provide for the basic needs of migrants.

These include the distribution of 5,000 free meals daily, for which the migrants queue for many hours, toilets, showers and facilities to wash clothing. The centre also provides streetlights at night, and rubbish collection.

Médecins du Monde operates a mobile clinic, and a bus ferries those they cannot treat in the camp to the local hospital, which is struggling to cope with people injured while attempting to jump onto moving trains, and those suffering malnutrition, tropical illnesses and contagious skin diseases.

Mr Valls will inspect the control tower and constantly upgraded security installation around the tunnel. He will meet police and gendarmes, and hold a joint press conference with Frans Timmermans, first vice-president of the EU Commission, and Dimitris Avramopoulous, the commissioner in charge of migration.

The average migrant in Calais takes between several days and five months to cross the Channel, according to Le Monde. While London blames Paris for not doing more to stop the migrants, Paris blames the British policies that make England an El Dorado for migrants.

The conservative former cabinet minister Xavier Bertrand, a candidate for president of the Calais region, has threatened to “let them through”. Mr Valls will meet Natacha Bouchart, the conservative mayor of Calais, who demands that the migrant camp be relocated to the other side of the Channel.