Minister for Foreign Affairs Charlie Flanagan, arriving at a meeting of EU foreign affairs ministers in Brussels, has voiced his preference for Fine Gael and Labour to continue in government. Video: European Council 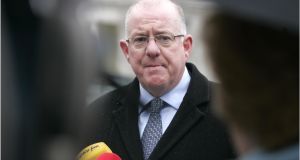 Minister for Foreign Affairs Charlie Flanagan who is due to attend an EU foreign ministers’ to discuss the situation in the Middle East. Photograph: The Irish Times

Minister for Foreign Affairs Charlie Flanagan has said his preference is for a Fine Gael-Labour coalition after the general election, but warned of a tough battle to make this happen.

Speaking at what is likely to be the final meeting of EU foreign affairs ministers in Brussels before the general election, Mr Flanagan said he was working towards the continuation of the current coalition framework.

“My preference is for the continuation of a Fine Gael-Labour government. We will be working towards that, but elections are tough, and anybody who says that any aspect of elections can be take for granted is entirely misplaced.”

Mr Flanagan said that he was fighting his eight general election.

“All elections are tough. This is going to be a very tough battle for the hearts and minds and I would ask people to become fully engaged in what is a really critical choice to be made by the Irish people over the next few weeks.”

He said the choice faced by the Irish electorate was “between certainty and stability on the one hand” and “uncertainty and chaos” on the other.

Speaking ahead of today’s EU foreign ministers meeting which is expected to be dominated by the situation in the Middle East, Mr Flanagan welcomed the implementation of the Iranian nuclear plan at the weekend which paved the way for the lifting of sanctions.

But he added the agreement was a “first step”, and “careful monitoring and ongoing verification” of the agreement needed to be continued.

“There needs to be careful monitoring and ongoing verification but the signals are very positive and I do believe it presents great opportunity for the type of engagement and dialogue that we haven’t seen in the past. It’s a first step.”

The EU has welcomed the lifting of sanctions against Iran, with the EU’s energy commissioner suggesting yesterday that EU officials may visit the Islamic republic as early as next month to explore possible energy links.

In a joint statement with Iranian foreign minister Javad Zarif over the weekend, the EU’s high representative for foreign affairs Federica Mogherini said the historic deal demonstrated that the most difficult issues could be solved by “political will, perseverance, and through multilateral diplomacy”.

“This is an encouraging and strong message that the international community must keep in mind in our efforts to make the world a safer place.”

The EU has been central to the Iranian nuclear talks since November 2013 when Ms Mogherini’s predecessor, Catherine Ashton, helped broker a deal with Iran.

Since then, the EU has held a seat at the negotiating table in Vienna Britain, Germany, China and the US.

Under the deal, confirmed by UN officials on Saturday evening, the prohibition on financial transactions to and from Iran will be lifted, including the transfer of funds between individuals and financial institutions.

Trade in oil and gas between the EU and Iran will recommence, and sanctions relating to shipbuilding, aviation and insurance will be lifted.

About 300 Iranian individuals and companies have been taken off the sanctions list, though those on the terrorism-related sanctions list will still be outlawed.

Late last week the EU extended its suspension of sanctions against Iran by two weeks to allow time for the implementation of the agreement, which was signed on July 14th.”

The suggestion by EU climate and energy commissioner Miguel Arias Cañete that EU officials would travel to Iran next month to explore possible energy links is indicative of trade opportunities the thawing of relations may bring.

In particular, the EU is eager to lessen its dependence on Russian energy - especially gas, which accounts for 30 per cent of gas supply into the EU.

The EU is considering the possibility of sourcing more energy from Iran via the so-called southern gas corridor through southern Europe.

Mr Cañete said yesterday that trade in oil, gas and nuclear energy might be considered, as well as liquefied natural gas (LNG).

The EU has been forbidden to buy crude oil from Iran since 2012. Prior to sanctions, Iran, which holds the world’s fourth-largest proven oil reserves, supplied most of the huge European oil refineries.

According to Iran’s central bank, the lifting of sanctions will free up €30 billion (€27.5 billion) of foreign reserves, though the US estimates this figure to be higher.

1 Coronavirus: Ireland plans for massive increase in tests
2 Coronavirus: what we know so far about how it is affecting Ireland
3 Coronavirus: Italy-Ireland match behind closed doors may be option, says Harris
4 Dublin stabbing: Parking space was at centre of previous rows, gardaí told
5 Miriam Lord: Lady Lou crowned the People’s Taoiseach at Liberty Hall
Real news has value SUBSCRIBE