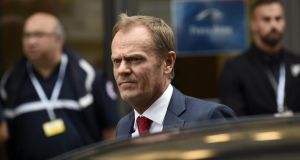 European Council president Donald Tusk: His visits to Egypt, Jordan and Turkey at the weekend shifted the focus of the EU debate to finding longterm solutions to the crisis. Photograph: John Thys/AFP/Getty Images

EU leaders held a crisis summit on migration in Brussels yesterday evening less than 24 hours after justice ministers backed a controversial refugee relocation plan. While ostensibly the deal reached by justice ministers on Tuesday allowed leaders to embark on a substantive discussion on migration last night, the “agreement” on Tuesday was anything but. Rather, the European Commission’s refugee quota scheme was backed by a majority of countries, with four member states voting against and one abstaining.

The decision to deploy the qualified majority voting mechanism was not expected – even Germany, a staunch supporter of mandatory quotas, was reluctant to push a vote.

Just a week ago, after the first justice and home affairs meeting on the topic ended in disarray, European Commission vice-president Frans Timmermans told reporters it was the job of the commission to convince sceptical member states about the merits of the plan. A week later he defended the adoption of the scheme without unanimous support as a way of showing “an increasingly sceptical civil society that we are capable of taking decisions”.

What changed in the intervening week? The question of credibility evidently trumped the preference for consensus, as the EU faced mounting criticism from international organisations, the media and anti-EU parties about the lack of a coherent approach to the refugee crisis.

The other pressure point came from European Council president Donald Tusk – his visits to Egypt, Jordan and Turkey at the weekend shifted the focus of the EU debate to finding long-term ways of tackling the crisis. Rather than the prospect of prime ministers squabbling over details of the relocation plan at dinner last night, Tusk wanted to clear the agenda to chair a more strategic discussion on the long term.

EU justice ministers may have salvaged the relocation scheme (though the redistribution of 54,000 refugees who were to be relocated from Hungary will be delayed) but the question remains – at what cost?

For the first time since the accession of a swathe of former communist countries to the EU, the countries of the east have found a collective dissenting voice. Though east European member states have always tended to speak out on questions such as energy policy or relations with Russia, the refugee crisis has been the catalyst that threatened to divide the EU along the fault-lines of the Iron Curtain.

Crucially, it has also seen eastern Europe at odds with Berlin, as countries have blamed Germany for unilaterally suspending the Dublin convention by offering refuge to undocumented Syrians arriving through Hungary.

Of course, the emergence of an east/west divide over the issue of migration masks some complexities of national positions. The last few days have exposed differences within the Viesegrad group – the alliance of Hungary, Poland, the Czech Republic and Slovakia – which convenes regularly to discuss strategy.

Significantly, Poland – with a population of 40 million by far the biggest member of Viesegrad – voted in favour of the refugee relocation plan, with Romania instead joining the remaining V4 dissenters. Similarly, Slovakia has been most visceral in its opposition to the quota system, reiterating yesterday its intention to bring the European Commission to the European Court of Justice, though the Czech Republic appears to have rowed back from previous threats.

Although in principle it has said it will adhere to the commission’s proposal to relocate 1,294 under the quota system, privately it believes the system will not be implemented by all EU countries.

The decision to deploy a qualified majority voting system may have permitted the European Commission to save face, but it could have repercussions in the long term. With a number of key EU decisions imminent – particularly a decision on the renewal of sanctions against Russia – the EU will be hoping it can keep its east European members on board on other policy issues in the coming weeks and months.