EU response to immigration under scrutiny 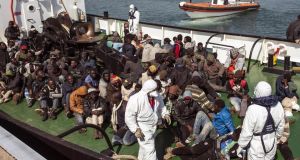 Rescued migrants after they disembark at Corigliano harbour, Italy, this week. Since April 10th alone, the Italian coast guard has rescued about 8,500 people. Photograph: Francesco Arena/EPA

Eighteen months on from the Lampedusa tragedy, which saw 366 migrants lose their lives off the Italian island, Europe’s migration problem shows no sign of abating.

Up to 400 immigrants are thought to have drowned last Sunday as they made their way across the Mediterranean from Libya. Meanwhile, Italian authorities are investigating claims Muslim migrants threw 12 Christians from Nigeria and Ghana overboard during a journey from north Africa to Italy this week.

As conflicts rage in the Middle East and Africa, the flow of migrants across the Mediterranean into Europe appears relentless, with the situation expected to intensify as weather conditions improve in the coming months. This week alone an estimated 450 people have died trying to cross the waters separating Europe and its southern and eastern neighbours, while the Italian authorities have picked up close to 11,000 migrants in search-and-rescue operations.

The numbers arriving to Europe illegally this year in search of a better life have dwarfed the figures for 2014. According to the Greek coastguard, the number of illegal migrants arriving in the country by sea tripled in the first three months of 2015, compared with the same period last year.

The spike in illegal crossings has turned the spotlight once again on the EU’s response to immigration. Earlier this week European Parliament president Martin Schulz called on the EU to take collective action. “The migration and refugee question in the Mediterranean is not just an issue for individual countries, it is one the European Union must treat as its own.”

Countries on the southern fringes of the European Union, including Italy, Greece, Malta, Spain and Bulgaria, have continually argued they carry an unfair burden when it comes to illegal immigration. The Dublin convention, an EU law that requires asylum seekers to make asylum applications in the state through which they first arrive in the EU, has also increased demands on these countries.

The European Commission is due to publish a migration strategy next month, with indications that immigrant-processing centres could be established in “countries of origin” as the EU attempts to reduce the number of immigrants arriving in Europe illegally.

The ending of Italy’s Mare Nostrum programme, a year-long search-and-rescue programme credited with saving the lives of tens of thousands of people, has been criticised by advocacy groups. The system has been superseded by Triton, an EU initiative operated by the border agency Frontex, which is operating with about a third of the budget of Mare Nostrum.

Amnesty International this week criticised the EU for scaling back its search-and-rescue capacity, a move it says was based on the “flawed argument” that such operations were acting as a pull factor for migrants.

The search for a coherent EU immigration strategy has also focused attention on the internal political situation in Libya. The EU’s high representative for foreign affairs, Federica Mogherini, a former Italian foreign minister, has been urging EU foreign ministers to take a more active role in the ongoing conflict in Libya, including possibly sending troops to the region, a suggestion that was met with scepticism from most EU countries.

Nonetheless, Libya is again high on the agenda at Monday’s meeting of EU foreign ministers in Luxembourg, which will be attended by Minister for Foreign Affairs Charlie Flanagan. As the EU struggles to respond to the migration crisis unfolding at its southern borders, for many the best long-term strategy is to support peace-building efforts in the trouble spots of north Africa and the Middle East to stem the flow of migrants desperate to flee their homes.