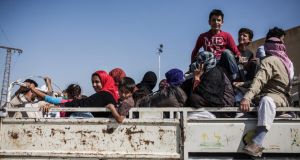 More than 70,000 asylum seekers have entered Hungary from Serbia so far this year, most having travelled from the Middle East, through Turkey and the Balkans. Photograph: Uygar Onder Simsek/AFP/Getty Images

Amnesty International has urged the European Union to overhaul a “failing” asylum policy, which leaves refugees vulnerable to criminals and corrupt police in Balkan states that are struggling to cope with growing numbers of migrants.

“Refugees fleeing war and persecution make this journey across the Balkans in the hope of finding safety in Europe, only to find themselves victims of abuse and exploitation and at the mercy of failing asylum systems,” said Gauri van Gulik, Amnesty’s deputy director for Europe and central Asia. “Serbia and Macedonia have become a sink for the overflow of refugees and migrants that nobody in the EU seems willing to receive.”

More than 70,000 asylum seekers have entered Hungary from Serbia so far this year, most having travelled from the Middle East, through Turkey and the Balkans. Amnesty said more migrants now use this route to reach the EU than attempt to cross the Mediterranean to Italy.

The majority of arrivals in Hungary are from Syria, Iraq and Afghanistan, and many travel long distances on foot and seek help from local smugglers to help them cross from one country to the next.

Serbia and Macedonia say they cannot afford to accept large numbers of refugees or asylum seekers; in 2014, only 10 asylum seekers were granted refugee status in Macedonia and only one received asylum in Serbia, according to Amnesty.