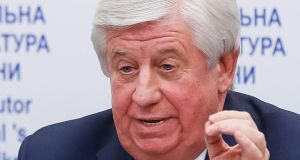 Viktor Shokin, who has been fired as prosecutor general of Ukraine after an overwhelming vote in parliament. He was accused of blocking major cases against allies and influential figures and stymying moves to root out graft. Photograph: Roman Pilipey/EPA

The European Union has welcomed the dismissal of Ukraine’s scandal-ridden prosecutor general and called for a crackdown on corruption, even as the country’s political crisis deepened over efforts to form a new ruling coalition and appoint a new prime minister.

Ukraine’s parliament voted overwhelmingly to fire Viktor Shokin, ridding the beleaguered prosecutor’s office of a figure who is accused of blocking major cases against allies and influential figures and stymying moves to root out graft.

“This decision creates an opportunity to make a fresh start in the prosecutor general’s office. I hope that the new prosecutor general will ensure that [his] office . . . becomes independent from political influence and pressure and enjoys public trust,” said Jan Tombinski, the EU’s envoy to Ukraine.

“There is still a lack of tangible results of investigations into serious cases . . . as well as investigations of high-level officials within the prosecutor general’s office,” he added.

Mr Tombinski said the EU was also concerned about the resignation or dismissal of several “reform-oriented” prosecutors and reports that Mr Shokin’s office was investigating a “highly-respected” anti-corruption group – an obvious reference to Kiev’s Anti-Corruption Action Centre, which had fiercely criticised Mr Shokin.

In what appeared to be his last act before dismissal, Mr Shokin sacked his deputy, Davit Sakvarelidze, who had repeatedly called for his boss to be fired.

Mr Sakvarelidze, a Georgian who was also chief prosecutor in the Odessa region, said his dismissal by Mr Shokin was part of “a cleansing of people who are prepared every day to fight corruption and the old guard without compromise”.

“In this case, the president, as guarantor of the constitution, should express his opinion explicitly, clearly and sharply,” Mr Saakashvili said.

“And not because it will benefit any one of us, but for the sake of the statehood, integrity and glorious future of Ukraine.”

Ukrainian president Petro Poroshenko is under huge pressure to appoint a new prosecutor general with a strong anti-corruption reputation, and to back investigations into the shadowy affairs of major businessmen and politicians.

The EU and United States are demanding as much, amid a political crisis that has paralysed reforms in Ukraine and jeopardised vital funding from international lenders.

Parliamentary speaker Volodymyr Groysman, a close ally of Mr Poroshenko, is the leading candidate to replace Mr Yatseniuk, who has refused to step down until a new coalition agreement is signed.

Ms Tymoshenko demanded on Tuesday that deputies approve several laws to “regulate” the situation in the country before any coalition deal is agreed.

Anton Gerashchenko, a prominent member of People’s Front, responded by saying that “you won’t build a European coalition through blackmail”.

1 Restaurants and gastropubs to reopen in December under Government plan
2 In Brexit end game, Johnson scours menu of unpalatable choices
3 A bridge, a border and two Covid worlds
4 Helen McEntee holds up well for someone with barely a leg to stand on
5 400 – yes, 400! – Irish retailers for all your online Christmas shopping
Real news has value SUBSCRIBE