Support for president after failed coup was almost universal. Now it is starting to falter 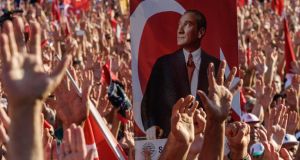 Turkey’s parliament has developed a reputation for heated arguments, fist fights and general chaos. Yet since the failed coup attempt on July 15th, opposition parties have put aside long-held distrust to line up behind the AK Party government and president Recep Tayyip Erdogan.

Despite since carrying out the biggest purge of suspected opponents in the history of the state, the government’s defeat of the military insurrection has enabled it to proclaim the importance of a democratic Turkey, something the opposition broadly supports.

Observers believe the government is also leaning on nationalist sentiment – a bedrock of secular Turkish identity since the founding of the state, which has been heightened by the attempted coup – to gather support from its traditional opponents.

In a first, the AK Party sent representatives to a rally in Istanbul last Sunday organised by the Kemalist Republican People’s Party (CHP) – a major about-turn in relations between Turkey’s two biggest parties.

The next day Erdogan met leaders of the CHP and the ultranationalist, right-wing Nationalist Movement Party (MHP) to discuss minor changes to the constitution.

The opposition leaders present referred to the gathering as “historic” and “positive”, and on Tuesday the CHP leader Kemal Kilicdaroglu called for the extradition from the United States of Fethullah Gulen, the exiled cleric accused by Erdogan of being behind the attempted coup.

The MHP is the fourth largest parliamentary party and opposes peace talks with separatist Kurds. It supports the return of the death penalty and has compared the Gulenists allegedly behind the coup to Islamic State and the militant Kurdish PKK.

The failed coup attempt has left the traditional opposition in a bind, caught between defending Turkey’s democracy and a president it scorns. Despite the handshakes and statements of unity, interviews with opposition leaders suggest fissures are emerging.

Although the narrative of defending democracy resonates with the opposition and has presented a picture that the major parties are behind Erdogan, the ongoing purge of civil servants and journalists under the provisions of a state of emergency is decried.

“I do not support the declaration of the state of emergency,” said Faruk Logoglu, the deputy head of the CHP. “The coupists must be punished with the full force of the law, but the process must be handled through the rule of law. What we need now is not less, but more democracy.”

Logoglu also criticised the crackdown on universities and educational institutions for being “one-sided and tinged with politics”.

Although its leaders have voiced their opposition to the attempted coup and have spoken with AK Party leader and prime minister Binali Yildirim, the Kurdish-rooted Peoples’ Democratic Party or HDP has been otherwise ignored by the government.

Part of the reason is that the nationalism being whipped up by the state is predicated on defeating or sidelining a decades-old demand for improved Kurdish rights.

“The crackdown is not related to the coup attempt but is an action against Erdogan’s opponents,” said Ertugrul Kurkcu, the honorary president of the HDP.

The HDP has implored the government to allow it to visit Kurdish separatist leader Abdullah Ocalan, who is imprisoned at Imrali island in the Sea of Marmara, south of Istanbul.

It fears the state of emergency may further violate Ocalan’s rights. He is not allowed visits from family or lawyers, or to receive correspondence. The HDP claims he now may be subjected to a “more vicious solitary confinement”.

Turkey’s military has for years vehemently opposed improving relations with the PKK and separatist Kurds, and sees Ocalan as an enemy of the state. He remains a pivotal figure for Kurds and his wellbeing is crucial to avoiding an open civil war with Turkey’s 16 million Kurds.

European and western leaders have criticised the widening purge of nearly 70,000 alleged Gulenists, and many Erdogan supporters in government and the national media have turned on the West. With Erdogan set to meet Russia’s president Vladimir Putin next month, the Turkish opposition says such reproach is counterproductive.

“Turkey’s friends in Europe must be more circumspect in their criticisms and should aim to create a feeling of solidarity with millions in Turkey who wish to see democracy and the rule of law flourish in their country,” said the CHP’s Logoglu.

“Harsh words from Europe and messages of punishment and exclusion serve only to harden anti-European feelings.”

The difficulty for the opposition now is that voicing opposition to the purge risks giving rise to the accusation of siding with Gulenists, the latest in a long line of perceived threats to Erdogan’s rule.