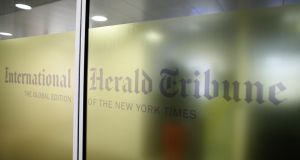 In the 1926 novel The Sun Also Rises, the first thing Ernest Hemingway’s fictional alter ego, Jake Barnes, does on returning from Spain to France is to buy the New York Herald from a kiosk in Bayonne, sit down at a cafe and read it.

Jean-Luc Godard’s 1960 New Wave film classic Breathless consecrated the newspaper – by that time called the New York Herald Tribune – as a symbol of expatriate American life in Paris, portraying Jean Seberg as a student hawking the paper on the Champs-Élysées.

Richard Stevenson, the Europe editor of the INYT, and Larry Ingrassia, the assistant managing editor for new initiatives, on a visit from New York, met with the Anglo-American Press Association at the INYT’s offices in the Paris suburb of Courbevoie.

The AAPA seemed to have been cast as representatives of print journalism. These days, anyone who mourns the death foretold of letters delivered by post, bound books and printed newspapers is assumed to be a modern-day Luddite, after the 19th-century weavers and farmers who smashed mechanised looms and threshing machines in Britain.

There was a certain tension with Stevenson and Ingrassia, the young Turks from New York and the embodiment of the digital world. “You are wiping out a great tradition which you don’t really understand,” said Ronald Koven, one of several AAPA members who had worked for “the Trib”.

“The only thing that’s changing on [Tuesday] October 15th are the words at the top of the flag,” Stevenson protested. “This is not some sort of hostile takeover . . . We love the print paper. We are going to put out a print paper for as long as we can, but the growth in readership is elsewhere.”

The future is digital, Stevenson and Ingrassia repeated like a mantra. The NYT still earns more from print than from the internet, but as print circulation declines, digital subscriptions rise. Print advertising subsides; digital advertising grows.

About 10 per cent of the NYT’s more than 700,000 digital subscribers are outside the US. “I’d be thrilled if we could double that to 20 per cent in a couple of years,” Ingrassia said.

Survival
Asked how long he thought print newspapers would survive, Ingrassia replied: “I don’t think it will die in the next five years, but I think it will die . . . The richness of the experience you get on a tablet . . . 10 years from now the print circulation of newspapers . . . the technological advances we’ve had in the past 10 years . . . it’s almost unimaginable.”

This evolution poses the basic question: at what point does a newspaper cease to be a newspaper? Stevenson and Ingrassia emphasised the importance of video, live-blogging and “multimedia packages” to the NYT.

“Those of us who think primarily about digital don’t think necessarily of newspapers as being competition,” Stevenson said. So who was their competition? The fact that the former head of the BBC is now chief executive of the NYT “is telling in terms of the culture and priorities of the paper”, he added.

Digital advertising
Techno utopians do not seem alarmed by the fact that two-thirds of digital advertising revenue goes to tech giants – Google et al – not to the composers, writers, artists, translators and newspapers whose production they appropriate without compensation. Studies show concentration and retention plummet when one reads from screens; no wonder we all seem to suffer from ADD. The internet revolution raises enormous sociocultural issues, but they’re not being addressed, in part because we are dazzled by technology.

“Our biggest challenge now is not transitioning from print to the website,” Stevenson said. “It’s keeping up with the technology and the way people consume news . . . The New York Times newsroom has become an R&D lab. We have some of the smartest, most creative people in the world . . . What they bring us is wizardry.”

Much of the INYT operation has already shifted from Paris to Hong Kong and London, to escape the high social charges and obstreperous printers’ unions that make it so costly to publish in France. I asked if the paper would continue to accord the importance to French news that it has in the past. “No,” Ingrassia answered. “It’s a small country in the world.”

Coverage has increasingly focused on the countries that “count” – chiefly the US, Russia, China, Germany. Internet readers can toggle between domestic US and global news. “A lot of readers from outside the US consciously, affirmatively, choose the US edition on the website,” Stevenson says.

There’s no place for Pat Rabbitte’s proverbial Irish caveman among the NYT’s subscribers, defined as “English-speaking, highly educated, mobile, affluent,” by Stevenson. “If you look at the political, cultural, business elite of the world . . . that’s our audience,” says Ingrassia. “There are five million, 10 million, of those people. If we can get 100,000 of them to subscribe digitally at 350 bucks a year, that’s far greater potential growth than with print.”

Like Starbucks, the INYT will offer a choice of sizes. For less than a third of the price of a full subscription, the “need to know” formula will provide what one needs to know before going to a dinner party – the 20 or 30 most important stories of the day.

“The hope is we can figure out new revenue streams that we haven’t actually imagined today,” Ingrassia concluded.