‘Election on mute’ as latest Greek contest staggers to a close 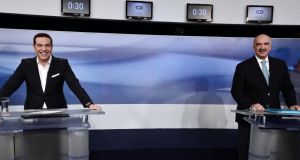 With only five days to go, there are few signs in the small city of Corinth that a general election takes place on Sunday.

Only the communist KKE party has put up posters on the main road into town. Apart from a leaflet from a minor party, little in terms of election literature has arrived on doorsteps.

Then again, this is anything but a normal election. Called in August, a hot month when politics and everything else falls into a torpor, the short campaign has been slow to gather momentum. Some say this reflects of the overall apathy and fatigue in a country that has already voted in one election and one referendum this year.

“These are elections on mute,” says Christos Dimas, a candidate for the conservative New Democracy party who is seeking re-election.

“Apart from the short election campaign, the public were out of their routine for most of it,” says Dimas (35). “People were at the beach or back in their villages. Schools only reopened this week, so many families are only now getting back to normal after the summer.”

“The people have already heard what we had to say in January and in the July referendum. Now what they need is a visit to discuss calmly to discuss the effects of the memorandum in everyday life.”

Instead of meetings in the cafes, most of his meetings are now in people’s homes, where the host will invite 20 or 30 people to hear candidates speak.

Dimas denies he’s preaching to the converted. “I don’t get to pick who I meet in the kafeneios. And in the homes, there’s always someone who will state their own view, often passionately and intensely.

“Many people express their anger about the property tax. Of course mistakes were made, but we had to explain what it achieved,” he says, referring to the tax introduced by the previous New Democracy-led coalition last year.

Dimas is confident that his party will come first in the Corinthia region, he says nationally it is neck and neck with Alexis Tsipras’s Syriza. He hopes that the constituency’s reputation as a weathervane for Greek politics will hold true on Sunday.

The swing is due to huge disappointment with Syriza, he says: “If the elections were held a month later, after the property tax bills went out and Syriza had to implement what they’ve signed up to, it wouldn’t garner more than 15 per cent.”

Still, as one student remarked after he and a dozen friends had a pre-arranged meeting with Dimas, not everyone will be voting for New Democracy with gusto.

“Our political system makes you vote for the less bad party, not for the best. I’ll vote for New Democracy, even though they haven’t persuaded me in some issues. But they’re better than Syriza, hands down.”